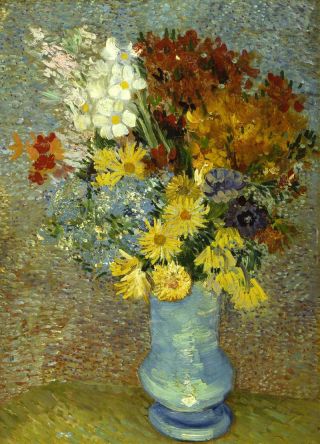 The color-change (from bright yellow to orange-gray) in Van Gogh's "Flowers in a blue vase" can be seen to the right and upper right of the painting. Two microsamples were taken from these areas.
(Image: © Kröller-Müller Museum)

Parts of Vincent van Gogh's "Flowers in a blue vase" painting have mysteriously changed color over time, and now scientists have figured out why: A chemical reaction between the paint and a protective varnish supposedly applied to the painting after the artist's death in 1890 turned his bright yellow flowers an orange-gray color.

The chemical degradation occurred right at the interface between the paint and the varnish, the researchers added.

Van Gogh painted "Flowers in a blue vase" in 1887 in Paris; the Kröller-Müller Museum in the Netherlands acquired the painting in the early 20th century. Like many other paintings at the time, this one was covered with what was considered a protective varnish.

Then, in 2009, a conservation treatment "revealed an unusual gray opaque crust on parts of the painting with cadmium yellow paint," said paintings conservator at the museum Margje Leeuwestein in a statement. [Photos of the Painting and Color Change]

The change in color was perplexing and didn't seem to be the result of simply the coating of varnish aging. "Varnish can become brown with age and thus can give all colors a more dark tone," study researcher Koen Janssens, of the University of Antwerp in Belgium, told LiveScience.

The research team found in an earlier study that photo-oxidation led to a darkening of Van Gogh's bright yellows in two paintings of his, "Bank of the Seine," and "View of Arles with Irises."

"However, when only the varnish has darkened and has not reacted chemically with the paint below it, it can relatively easily [be] removed and the original bright colors of the paint will become visible again," added Janssens, chairman of the university's department of chemistry.

Mysteriously, he said, the paint beneath the varnish had also become brittle and any attempts to remove the varnish failed — a bit of the gray crust came off with the varnish.

To sleuth out the culprit for the color change without sabotaging a masterpiece, experts at the museum took two microscopic paint samples from the original artwork. Janssens and colleagues used powerful, yet microscopic, X-ray beams to determine the chemical composition as well as the structure at that paint-varnish interface. Rather than the crystalline cadmium sulfate compounds they would expect due to oxidation of the paint, they found a lead-sulfate compound.

(When ultraviolet and blue light falls on the paint, so-called photo-oxidation leads to the liberation of cadmium ions and sulfate ions from the yellow cadmium paint.)

It seems, the researchers said, that the negatively charged sulfate ions hooked up with lead ions from the varnish to form anglesite, an opaque lead-sulfate compound. The lead likely came from a lead-based drying agent, or siccative, added to the varnish.

To keep Van Gogh's painting from deteriorating further, Janssens suggests two actions. Since the process starts with the photo-oxidation, he recommends keeping the masterpiece in lower light conditions. In addition, he suggests using a more "high-tech type of varnish" that is more stable than the one previously used.

The Van Gogh analyses, detailed in a forthcoming issue of the journal Analytical Chemistry, were carried out at the European Synchrotron Radiation Facility ESRF in Grenoble, France, and the Deutsches Elektronen-Synchrotron DESY in Hamburg, Germany.

Other mysteries of Van Gogh resolved by science include: a disputed still life is the Real McCoy; his famous sunflowers are genetic mutants; and a painting thought to be a self-portrait actually shows the artist's brother.