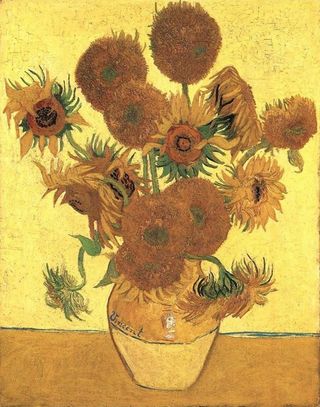 The whimsical appearance of some of the sunflowers in Vincent van Gogh's paintings isn't the result of the painter's alleged mental illness. Researchers have found that overly-bushy sunflowers are actually the result of a genetic mutation in some strains of the flowers.

The typical sunflower has a brown, seed-filled middle and a ring of yellow petals, but some seem overgrown with petals in "double rows" — like one variety called the "Teddy Bear" — and others have scrawny petals and seeds extending nearly to the edge of the flower. The researchers discovered that a genetic mutation is to blame for these differences.

"In addition to being of interest from a historical perspective, this finding gives us insight into the molecular basis of an economically important trait," study researcher John Burke, at the University of Georgia, said in a statement. "You often see ornamental varieties similar to the ones Van Gogh painted growing in people's gardens or used for cut flowers, and there is a major market for them."

Sunflower heads — actually multiple small flowers called florets — have a very specific symmetry. The "seeds" are laid out in a special geometric pattern. In a normal sunflower, the outer florets sprout into petals and the inner ones mature into seeds. [See more images of sunflower varieties]

To double-check their results, they sequenced this gene and looked for it in several commercially available types of sunflowers. They never saw the mutation in flowers that had the traditional sunflower appearance, but always saw it in the fluffy varieties.

The newly discovered mutation changes how the plant regulates where the line between "petals" and "seeds" is drawn. When mutated, the gene can move this boundary either closer to the center of the flower head or farther away from it and closer to the outer layers of florets.

If the boundary line moves toward the center, the flower loses the traditional "sunflower" appearance and looks more like the "Teddy Bear" sunflower. If it moves outward, the flower has more seeds and a dinky layer of petals.

"All of this evidence tells us that the mutation we've identified is the same one that Van Gogh captured in the 1800s," Burke said.

The study was published today (March 29) in the journal PLoS Genetics.