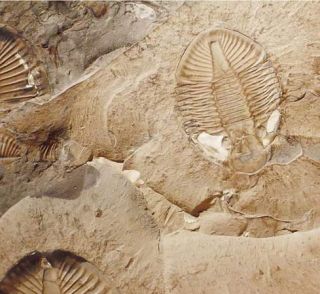 At least it was a quick death.

Scientists have discovered that ancient animals preserved in the famous Burgess Shale fossil deposit were killed by a mud slurry that buried them so deep their whole bodies were petrified.

The finding solves a mystery that puzzled paleontologists since the revealing fossil trove was discovered in 1909 — how were the animals' bodies so well preserved?

"The Burgess Shale is really a fossil bonanza," said Jan Zalasiewicz, a geologist at the U.K.'s University of Leicester, who made the new burial discovery with Sarah Gabbott, a paleontologist at the University of Leicester. "What was remarkable about it was that it had a whole array of standard hard-bodied fossils, which we commonly find, but also a variety of soft-bodied fossils."

The Canadian Rockies site was a sea bed 500 million years ago, during the middle of the Cambrian Period.

Shortly before this time, the first complex life appeared on Earth.

At most fossil sites, only bones and shells are strong enough to survive through the millennia. But at the Burgess Shale, even soft body parts were preserved. Normally, they decompose soon after the animal's death. Scientists have found the remains of worms at the site, and can even see traces of critters' guts and eyes.

To understand how this miracle of preservation occurred, the researchers carefully analyzed the layers of rock at the site. By looking at the shale stone millimeter by millimeter under a microscope, they determined it wasn't slowly deposited in many bits over time, as is typical in this type of mud rock. Rather, thick layers were created all at once, with grains of sand and shell fragments suspended in them, which normally would have sunk to the bottom.

The researchers deduced that the rock layers were likely created when a gooey slurry of mud washed down over the sea bed from around a steep cliff, instantly killing unsuspecting creatures at the bottom.

Because the animals were buried under such a thick layer of mud, the soft parts of their bodies did not immediately decay but were preserved.

The scientists think floods of mud like this occurred periodically here, perhaps spurred by earthquakes, each time depositing a new layer on top of the old.

The research is detailed in the Jan. 2008 issue of the Journal of the Geological Society.

Today, the Burgess Shale represents a frozen sliver of life from a time when Earth and its life were completely different.

"It dates from very early in the history of complex multi-cellular life," Zalasiewicz told LiveScience. "For quite a while, it was the main window we had on the diversity of life at this time. It's very significant because one of the great enigmas about Cambrian life is that it seems to have started very suddenly."

Life existed for 3 billion years before the Cambrian Period, but almost all of it was simple life composed of single cells.

"Then very suddenly at the beginning of the Cambrian, a whole host of life, all the major groups of animals, appeared," Zalasiewicz said. "That is called the Cambrian explosion. It's still a mystery as to how and why this great flowering of multi-cellular life took place."

Earth's flora and fauna back then were very different from today.

"All life was in the oceans pretty much," Zalasiewicz said. "There may have been fungi and algae on wetter, shadier parts of land. But essentially there were no trees, grass or insects. There were a variety of invertebrates in the oceans, trilobites and so on, and the very earliest vertebrates. It was a water world."