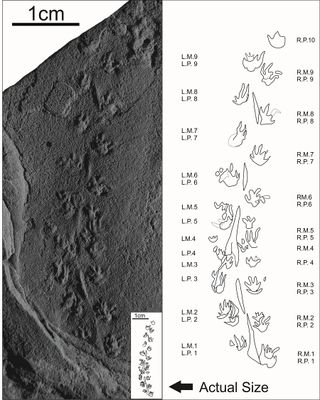 The world's tiniest fossil footprints have been found in Canada. Researchers say they were left behind by a scurrying salamander-like creature 315 million years ago.

An amateur paleontologist made the discovery at Nova Scotia's Joggins Fossil Cliffs, sometimes called "the Coal Age Galápagos." With fossilized upright trees and evidence of the Earth's first reptiles, the UNESCO World Heritage Site is considered to be an excellent reference for the Coal Age (about 300 million years ago).

"When I saw the very small tail and toes I knew we had something special," Gloria Melanson, who found the footprints while walking Joggins beach, said in a statement. "I never thought it would be the world’s smallest."

The 30 footprints Melanson found measure just 1.6 millimeters (0.06 inches) long for the front feet and 2.4 mm (0.09 in) for the back feet. Researchers who described her finding in the journal Ichnos last month said the prints likely belong to an ancient amphibian — such as a temnospondyl or microsaur — that measured just 8 mm (0.3 in) from snout to tail.

The tiny traces might even tell a story. The researchers say the footprints show the animal started off walking, then changed directing and began running. But they said it's up for speculation whether the creature was chasing after a small insect, startled by predator, or perhaps taking its first shaky footsteps on land after transforming from a tadpole.

The fossil footprints are now on display at the site.