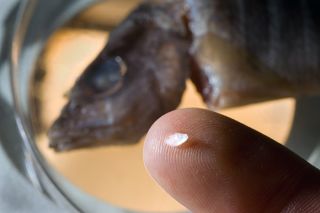 Otoliths, or ear bones, are constantly and permanently recording the conditions a fish is experiencing at any time.
(Image: © Tom Kleindinst, Woods Hole Oceanographic Institution)

Where do young fish hang out? Consult their ear stones.

Also known as otoliths, ear stones help fish orient themselves. As a fish grows, it takes minerals like calcium from its environment and incorporates them into its otoliths in a series of layers. These layers contain information about where the fish was at different times in its life, because the mineral makeup of each location is unique.

By analyzing the mineral content of fish ear stones and matching it to different locations in the Red Sea off the coast of Saudi Arabia, researchers created a life history of various fish, reconstructing where they migrated to and when.

The results, published Sept. 3 in the journal Proceedings of the National Academy of Sciences, surprised the study authors. For one, young fish traveled much farther than expected between spawning grounds and reefs.

Some fish also grew up in areas where they hadn't previously been detected, according to the WHOI release. For example, the study found that a fish called Ehrenberg’s snapper is able to settle directly onto coral reefs, despite the fact that in several years of regular work in this area, the researchers never saw them there.

The research shows that juvenile fish are surprisingly versatile. But it also reveals that far-flung habitats are vital for replenishing the reef, made possible by long migrations.

The implication is that it isn't enough to protect adult habitat on coral reefs; habitats that supply those reefs and the migration corridors between them also need protection.

"It won't work to protect the reef but, for example, allow a hotel to be built on the seagrass beds and mangroves," said WHOI biologist Simon Thorrold in the statement.