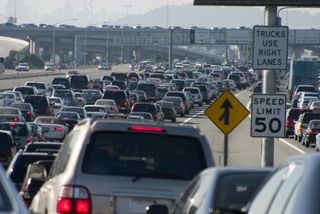 The last two months of the year bring a rise in drive times, national data show. The most predictable spike happens the Wednesday before Thanksgiving when commuters and travelers alike hit the roads.

China has fully embraced the American dream by snapping up new cars as a sign of middle class prosperity, but only at the growing cost of traffic jams and polluted cities. A Chinese municipality has finally taken the bold step to restrain the worst excesses of automobiles by restricting ownership of new cars through auctions and lottery systems.

The move seems as astonishing "as if Detroit or Los Angeles restricted car ownership," according to Keith Bradsher of the New York Times. Guangzhou represents one of China's largest automaker centers — the frontlines for a brewing battle between Chinese public pressure for improved public health and the Chinese government's mantra of encouraging economic growth.

Automakers have Beijing's support in opposing additional car ownership restrictions for fear of hurting China's economic growth. But the New York Times sees the fight over car ownership as a sign of change in Chinese priorities and values as it grows into a "modern, industrialized economy."

The car ownership restrictions look extreme and perhaps a touch authoritarian in the U.S., where years of auto industry advertisements have shaped American beliefs to see cars as one of the ultimate expressions of personal freedom. Americans have grown so accustomed to life in the fast lane that many forget how hard the public once resisted having cars on the road. [Why America's Love Affair with Cars Is No Accident]

Still, even if the U.S. seems unlikely to ever follow suit, it too may want to consider whether it always wants a car-filled future — or whether building more public transportation could help reshape cities for the better and free up some streets for drivers.