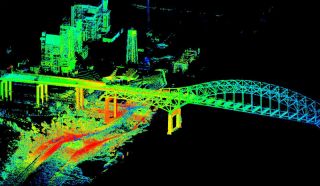 Hurricane Isaac sent sheets of rain from the sky and ocean waters surging ashore, inundating large regions of the Gulf Coast with devastating floods last week. Teams of scientists are already on the ground, using advanced laser-imaging technology to capture the storm's effects in 3D.

Teams with the U.S. Geological Survey are using lidar (short for light detection and ranging) to help make intricately detailed topographic maps of the floodwaters Isaac brought to the hardest hit population centers in Louisiana, Mississippi and Alabama.

The scans capture not only the extent of the flooding, but also catalog damage to buildings, levees and other structures.

Lidar technology is similar to radar, but uses lasers instead of radio waves to capture location data. The instruments send out beams of light and construct 3D maps by measuring the return time as the light bounces off objects in the environment as far away as two-thirds of a mile.

Strapped to moving vehicles or set atop tripods, the lidar scanners capture millions of data points over the course of just a few minutes. The 360-degree scans will allow the USGS to build maps that reveal which areas are most vulnerable to flooding during hurricane season, and can also reveal even subtle structural damage Isaac has caused, according to a USGS statement.

"Imagine a 360-degree panoramic photo, but made with laser points where everything you can see has a known elevation and location," Toby Minear, a research hydrologist at the USGS California Water Science Center, who is participating in the study, said in a statement.

Lidar scanners, which are also often used aboard aircraft, are an increasingly common sight in the aftermath of natural disasters. Research teams used them to map the devastation in Chile after the 2010 earthquake and tsunami, and the technology has been used to similar effect in Haiti and Japan.

Areas of Louisiana are still covered in standing water five days after Hurricane Isaac barreled across the region, and power outages persist, according to reports from the Associated Press.

The remnants of the slow-moving storm are bringing rain and warnings of flash floods to the Northeast today, after dumping several inches of much-needed rain in the Midwest over  the weekend.