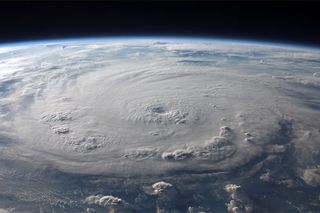 In the 1970s, the National Hurricane Center began using categories to describe how strong a hurricane's winds are and how much damage its gusts might be expected to cause.
(Image: © NASA.)

Climate change's growing threat has inspired several geoengineering ideas to cool the Earth by reflecting sunlight back into space. But some scientists want to harness the same reflective idea for stopping destructive hurricanes from ever getting started.

The hurricane-focused approach comes from a plan detailed by atmospheric scientists in the journal Atmospheric Science Letters, according to Climate Central. Their idea involves spraying tiny droplets of seawater into the air to "brighten" the clouds and make them more reflective — a way of lowering sea surface temperatures to prevent the tropical storms from growing.

But the same scientists also pointed to the dangers of such cloud-brightening experiments reducing rainfall over North America and northern Eurasia. If they can't prevent such side effects, they argued that the "marine cloud brightening" technique should never be used.

A British climate-cooling experiment that would have used balloons to water into the atmosphere ended up canceled over similar disagreements and a patent dispute. But that has not stopped U.S. scientists from planning a similar balloon experiment in New Mexico.

No international rules currently exist to effectively regulate geoengineering experiments. That may change as the debate grows fiercer among researchers and policymakers, and as scientists begin taking more steps to make such experiments into reality.