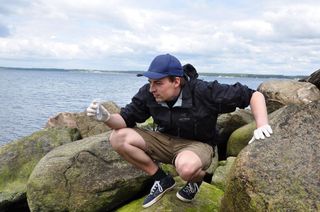 PhD student Philip Francis Thomsen is sampling seawater for DNA analyses. The researchers found DNA from both fish and whales in the water.
(Image: © Jos Kielgast)

From snake skins and tiger tracks to bear hairs and panda poop, land animals leave behind lots of clues for researchers to monitor endangered populations. Following whales, fish and other marine animals in the world's vast oceans is a much more difficult task.

But researchers in Denmark say they've devised a new method to track the world's ocean-dwellers using DNA tests on seawater samples. The findings are detailed in two studies published Aug. 29 in the journal PLoS ONE.

"The new DNA-method means that we can keep better track of life beneath the surface of the oceans around the world, and better monitor and protect ocean biodiversity and resources," postdoctoral researcher Philip Francis Thomsen, of the University of Copenhagen, said in a statement.

After finding that small freshwater samples contained the genetic markers of several different animals, Thomsen and his team showed that the same was true for seawater. In one study, they said they found the DNA of 15 different fish species in just a half-liter (17 ounces) of ocean water.

"We found DNA from both small and large fish, as well as both common species and rare guests. Cod, herring, eel, plaice, pilchard and many more have all left a DNA trace in the seawater," said Thomsen.

In another study, the researchers showed harbor porpoise genetic material turned up in western Baltic Sea samples, meaning large marine mammals in addition to fish could be tracked using this method.

But the technique needs some work. The DNA method was not as reliable as acoustic detections in monitoring the porpoise population, the researchers said. However, genetic material in the water samples showed signs of some rare species that the sound recordings missed.

"At one site we detected long-finned pilot whale, Globicephala melas, a species rarely sighted in the Baltic," the researchers wrote in one study. "Therefore, with optimization aimed towards processing larger volumes of seawater this method has the potential to compliment current visual and acoustic methods of species detection of marine mammals."