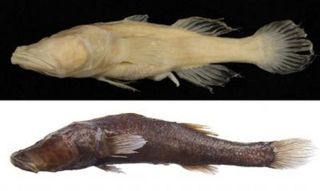 A group of freshwater fish in Madagascar and another in Australia have a lot in common. Both are tiny, have no eyes and live in the total darkness of limestone caves. Now scientists say these two groups are more alike than thought — they are actually each other's closest cousins, despite the ocean between them.

Using DNA analysis, researchers found that the two types of blind fish — Typhleotris in Madagascar and Milyeringa in Australia — descended from a common ancestor and were estranged by continental drift nearly 100 million years ago. The scientists say their finding marks an important first.

"This is the first time that a taxonomically robust study has shown that blind cave vertebrates on either side of an ocean are each other's closest relatives," researcher Prosanta Chakrabarty, of Louisiana State University (LSU), said in a statement. "This is a great example of biology informing geology. Often, that's how things work. These animals have no eyes and live in isolated freshwater caves, so it is highly unlikely they could have crossed oceans to inhabit new environments."

Rather the fish may have been isolated in their respective limestone caves when the southern supercontinent Gondwana split apart. Researchers reported in 2010 in the journal Biology Letters a similar phenomenon in blind snakes; when Gondwana was just breaking apart and Madagascar broke off of India, the blind snakes hitched a ride aboard the giant slabs of Earth. The result? The snakes evolved into different species.

In the new study, Chakrabarty and colleagues, while examining these blind fish genera, also discovered some new species of eyeless, cave-dwelling fish, including one — to be named in a future publication — that is darkly pigmented, even though it evolved from a colorless ancestor.

"It is generally thought that cave organisms are unable to evolve to live in other environments," studyresearcher John Sparks, of the American Museum of Natural History, said in a statement. "Our results, and the fact that we have recently discovered new cave fish species in both Madagascar and Australia belonging to these genera, are intriguing from another perspective: They show that caves are not so-called 'evolutionary dead ends.'"