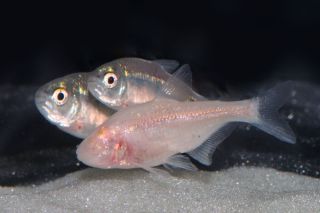 Because Mexican cavefish are a variant of the Mexican tetra, the fish can interbreed, with some of the surface-dwelling fish migrating and joining the cave populations, the study showed.
(Image: © Richard Borowsky)

Cavefish that have lost their eyesight and body coloring as means to adapt to the dark depths where they dwell show no prejudice against their surface-dwelling, eye-equipped counterparts at the surface of the water.

In fact, new research suggests the two fish — one with eyes and a silvery-gray body, and the other with skin flaps covering their eyes and no pigmentation — are the same species of Mexican cavefish (Astyanax mexicanus). They just look completely different.

Researchers from Portugal, the United States and Mexico studied DNA samples from 11 populations of cavefish living in freshwater caves located in three distinct regions of northeastern Mexico. They compared the DNA with samples taken from 10 populations of the cavefish's surface-dwelling cousins to better understand the evolutionary origins of the physical differences between the fish.

Results showed that despite their differing living quarters, the Mexican tetra surface populations were genetically very similar, but the cavefish had even less genetic diversity. This may be attributed to their limited space and food, according to the study. [In Images: The Extraordinary Evolution of 'Blind' Cavefish]

The study also found that, because the cavefish are a variant of the Mexican tetra and can interbreed, some of the surface-dwelling fish had migrated and integrated to join the cave populations — and vice versa. The cavefish populations with the highest influx of migrants from the surface also had the highest genetic diversity.

"Despite interbreeding and gene flow from the surface populations, the eyeless 'cave phenotype' has been maintained in the caves," study researcher Martina Bradic of New York University said in a statement. "This indicates that there must be strong selection pressure against eyes in the cave environment."

One theory of the A. mexicanus' varying populations is that, historically, at least two groups of the fish lived in the rivers of Sierra de El Abra, Mexico. One group colonized the caves and became extinct on the surface. The other group then restocked the rivers, but also invaded the caves, joining the original cave-dwelling population, according to the researchers.

"We were fortunate in being able to use A. mexicanus as a kind of 'natural' experiment, where nature has already provided the crosses and isolation events between populations for us," said study researcher Richard Borowsky of the Cave Biology Group at New York University. "Our genotyping results have provided evidence that the cave variant had at least five separate evolutionary origins from these two ancestral stocks."

Previous research estimates that populations of A. mexicanus migrated to the complete darkness of caves a million or more years ago. Although their sightless eyes are covered by flesh, the cavefish aren't fully blind, because they have retained an organ called the pineal gland, which enables them to detect light.