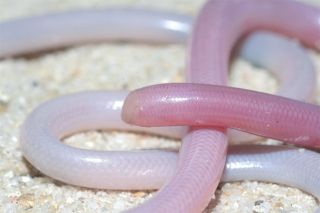 Blind snakes have been discovered to be one of the few species now living in Madagascar that existed there when it broke from India about 100 million years ago, according to a new genetic study.
(Image: © Frank Glaw.)

Blind snakes are small worm-like creatures that likely feel their way through underground homes by sensing chemicals through their skin.

It turns out, these organisms have been around since 150 million years ago, when the supercontinent called Gondwana was just breaking up, according to new genetic research. The study suggests that when Madagascar broke off of India, the blind snakes hitched a ride aboard the giant slabs of Earth.

The result: Blind snakes evolved into different species that ultimately spread around the globe.

"Blind snakes are not very pretty, are rarely noticed, and are often mistaken for earthworms," said Blair Hedges, professor of biology at Penn State University. "Nonetheless, they tell a very interesting evolutionary story."  (Unlike earthworms, blind snakes have backbones.)

Most organisms living on the southern continents that were once Gondwana didn't appear until after the continent split apart. For instance, the lemurs of Madagascar likely rafted to their current location from Africa rather than drifting with plate tectonics – the movement of giant slabs of Earth's crust, which ultimately moves continents and builds mountains.

But blind snakes are different.

"We've identified living organisms – these blind snakes – that trace back to an ancient continent that split apart and then carried these snakes with them," Hedges told LiveScience.

About 260 species of blind snakes exist, forming the largest group of worm-like snakes, called scolecophidians. The small burrowing animals are typically found on southern continents and tropical islands, though they occur on all continents except Antarctica.

They spend most of their lives in the soil underground, eating the eggs and larvae of ants and termites.

"These blind snakes eat very small things, and they eat a lot of them," Hedges said. "They'll go into a termite mound and just gobble up dozens and dozens of eggs and larvae."

In fact, they have specialized jaws that work like a conveyor belt, pulling in larvae and eggs into their mouths as if at a checkout counter.

Because there are almost no fossils of blind snakes known, their evolution has been tricky to piece together. The animals' underground lifestyle has perplexed scientists who have wondered how the animals managed to spread from continent to continent, barring some mysterious underground passages found.

There are three basic ways an organism can disperse across the globe: It can raft aboard floating islands; if equipped it can fly; or it can drift on shifting continents.

To figure out the blind snake's mode of transport, Hedges and his colleagues, including Nicolas Vidal, professor at the National Museum of Natural History in Paris, analyzed 96 blind snake species for five genes, particularly looking at mutations in those genes. By counting up the mutations, which is not a simple process and so involved special computer software, the team could figure out how long ago the species lived.

The results were then calibrated with fossils and geological evidence to firm up the timing. The team found that splits between species were as old as 150 million years ago, when Gondwana was first breaking apart. The blind snake species in Madagascar and India were traced back to about 100 million years ago, when Indigascar (the name the researchers gave to the India-Madagascar landmass) was breaking up.

"That mini-continent [India] moved northward after it split from Madagascar, carrying blind snakes with it and eventually colliding with Asia (causing the Himalayas), roughly 50 million years ago," Hedges said.  "Then some of resident blind snakes left and dispersed over land to other areas in southern Asia."

The blurry-eyed wrigglers in other parts of the world must have rafted across oceans aboard floating flotsam at least once during their evolutionary history. Subsequent splits between species probably happened as the animals followed the spread of their prey, ants and termites, in various geographic regions, the team suspects.

In addition to reinforcing the well-established idea that plates shifted and continents broke up in a certain way, the results also provide a stellar example of a type of species diversification.

"Plate tectonics has only been widely accepted since the 1960s, and so since then biologists have been looking for examples exactly like this that follow the breakup of Gondwana, and we've been having a hard time finding them," Hedges said. "This is an unusual group that has been in Madagascar from the beginning."

The research will be published in the March 31 issue of the journal Biology Letters.