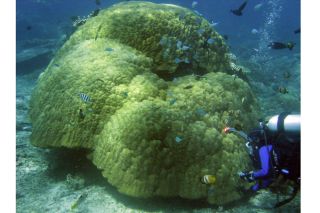 A hardy coral species that can grow to the size of a small building may be tough, but its sturdy larvae rarely make it across a huge swath of deep water that cuts through the Pacific Ocean, researchers have found.

The find that Porites lobata coral almost never crosses the Eastern Pacific Barrier, a trough of deep, open ocean that stretches for 3,350 miles (5,390 kilometers), adds to a long list of evidence that suggests the deep strip of water serves as a kind of biological border, separating species that live in the Eastern Pacific from those that live in the Central Pacific Ocean.

Scientists have found that a host of marine organisms stay on their respective sides of the Eastern Pacific Barrier, yet the recent study, to be published in the journal Molecular Ecology, is the first to take a comprehensive look at how coral species figure into the game.

Lead researcher Iliana Baums, an assistant professor of biology at Penn State University, chose to focus on Porities lobata precisely because it's so tough.

"Compared with other coral species, Porites lobata larvae seem able to survive for longer periods of time; for example, the weeks that are required to travel across the marine barrier," Baums said in a statement.

P. lobatalarvae also possess symbiotic cells that can provide food during a long journey. In addition, the adults seem able to brave more extreme temperatures, as well as more acidic ones, Baums added.

"So if any coral species is going to make it across, it is this one," she said.

Baums and her team collected samples of the coral from both sides of the Eastern Pacific Barrier. Genetic analysis revealed that the populations bore little resemblance to one another.

"This means that coral larvae originating in the Central Pacific simply are not making it across the ocean to the Americas," Baums said.

However, they did find one exception — a small pocket of central Pacific coral living in an area of the Eastern Pacific near Clipperton Island, a tiny, uninhabited atoll many hundreds of miles southwest of Mexico.

Baums said it's likely that the waters near Clipperton are warmer than much of the Eastern Pacific, thus better recreating the warm conditions found in the Central Pacific.

"Interestingly, the coral that are lucky enough to cross the EPB to Clipperton Island stay there and don't go any farther," Baums said.