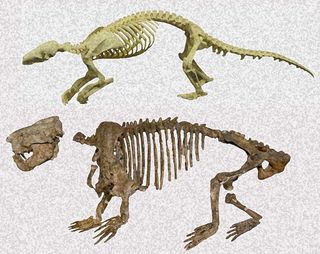 A new look at a fossil mammal with powerful front legs for digging is clearing up questions about the origin of a group of strange and scaly modern-day creatures called pangolins.

First excavated in Mongolia in the 1970s, the fossil sat in storage for decades until researchers for the Russian Academy of Sciences rediscovered and analyzed it, reporting their results today (Aug. 27) in the Journal of Vertebrate Paleontology.

What they found was a dog-size, strong-shouldered digger called Ernanodon. This mammal lived about 57 million years ago, after dinosaurs had died out and our furry ancestors had taken over. Ernanodon was known from one other fossil found in China, but that specimen is warped, and some archaeologists even thought it might be a fake.

The new discovery puts those accusations to rest, said study researcher Peter Kondrashov, an anatomist at Kirksville College of Osteopathic Medicine in Missouri.

The find also helps put the mysterious Ernanodon into the mammal family tree. Archaeologists had suspected that the animal might be related to modern-day sloths and armadillos. Instead, Kondrashov said, it is more closely tied to pangolins, which live in the tropics of Asia and Africa. Pangolins are bizarre mammals covered in scales. Like anteaters, they have a long, sticky tongue for catching termites and other insects.

Ernanodon probably did the same, Kondrashov said. Little is known about the Paleocene environment in Asia that Ernanodon called home, but similar latitudes in North America were a mixture of forest and open landscape. Ernanodon lacked adaptations for climbing and had only minimal teeth, suggesting that it was a ground-dweller that ate soft food like insects. Its strong claws and powerful shoulders would have helped it dig into anthills and termite mounds.

"It was definitely a terrestrial mammal. It doesn't have any adaptations for climbing trees," Kondrashov said. "It was just designed to walk on fairly flat surfaces."

"This is the time when all the main groups of mammals were established on the planet. This history is really well-deciphered in North America, and there's very little known about Asia," he said. "This helps us to understand how these early steps in the evolution of major groups of mammals occurred in Asia."