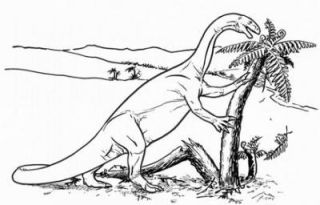 Artists' depiction of a Plateosaurus, a plant-eating dinosaur that weighed up to four tons.

By mimicking the guts of the biggest dinosaurs, scientists now find the animals' diets of evergreens and ferns were more nourishing than previously thought.

These new findings help solve the mystery of how such dinosaurs reached huge sizes off seemingly poor food.

The largest animals to have ever lived on land were colossal vegetarians known as sauropods, which included the massive Apatosaurus (once known as Brontosaurus). Strong evidence reveals these herbivores may have reached up to 130 feet in length and 110 tons in weight, and sketchier data hint they might have grown even larger.

These enormous beasts must have relied mostly on ferns, gingkoes, conifers and similar plants, as the flowering plants we are most familiar with today did not dominate the globe until late into the Age of Dinosaurs. However, those plants are generally seen as very poor in nutritional value, because few animals eat such flora today.

To shed light on how dinosaurs lived off these plants, scientists devised artificial dino guts consisting of airtight glass syringes that held microbes normally found in sheep guts. Living examples of the kinds of vegetation found during the sauropods' time were then ground up and placed in the syringes, which then fermented with the bacteria.

The researchers found that gingkoes, horsetails and some ferns and conifers packed surprisingly reasonable amounts of energy, performing roughly as well as grasses and temperate foliage — helping to explain how sauropods and other vegetarian dinosaurs "could exist on the food sources available to them at that time," said researcher Jürgen Hummel, a zoologist at the University of Bonn in Germany.

If the sauropods had metabolisms similar to elephants, the scientists estimate a roughly 77-ton dinosaur would have had to eat more than four times the amount of dry plant matter necessary for an 11-ton elephant. Still, eating this much might not have been too much of a problem for the sauropods — they swallowed food whole without chewing it, meaning they could have consumed huge amounts of chow daily.

It was long thought that the long necks of sauropods helped them browse tall trees. One kind of conifer the scientists looked at, the araucarias, was slow burning yet high-energy, and they said it could have proven quite nourishing if it fermented in the huge stomachs of large sauropods for a while.

Animals today may only rarely feed on the same vegetation that sauropods once dined on, because those plants may have increased their defenses since the Age of Dinosaurs to compete with flowering plants, the researchers speculated.

Hummel and his colleagues detailed their findings online Feb. 6 in the journal Proceedings of the Royal Society B.