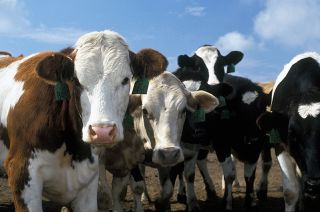 Rising corn prices have led a Kentucky farmer to switch corn for candy in his cows' diets.
(Image: © North Carolina Department of Agriculture)

You know what they say: If life gives you bulk quantities of defective candy unfit for human consumption, make chocolate-laced cattle feed.

Or that's what they say in Kentucky apparently, where an industrious cattleman has responded to skyrocketing corn prices by swapping out the corn in his 1,400 cows' diets for low-grade candy.

The Paducah, Ky.-based WPSD Local reports that Joseph Watson, owner of United Livestock Commodities, believes that candy is a healthy drought-time substitute for corn, even suggesting that its advantages over the vegetable go beyond price.

"It actually has a higher ratio of fat [than] actually feeding them straight corn," he told WPSD, later adding that his feed mixture, which also includes an ethanol byproduct and a mineral nutrient, has "all the right nutrition for them."

To a layperson with even a minimum exposure to the doctrines espoused by practitioners of dentistry or motherhood, the claim that candy is just as good as vegetables does not need to be dismissed.

But Life's Little Mysteries consulted John Waller, a professor of animal nutrition at the University of Tennessee, and he didn't seem the least bit scandalized by candy-fattened cows.

"I think it's a viable [diet]," Waller said. "It keeps fat material from going out in the landfill, and it's a good way to get nutrients in these cattle. The alternative would be to put [the candy] in a landfill somewhere."

According to Waller, padding out cow feed with waste candy is nothing new. He says he first heard of Tennessee cattle raisers using candy years back, and that throughout the country, whether it's orange rinds in Florida or almond hulls in California, beef producers are serving the hard-to-get-rid-of byproducts of local food industry to their herds.

"Ruminant animals are very good at utilizing a wide variety of feedstuffs, because the microbes in the rumen can digest things that other animals can't utilize," he said.

Ruminant animals, which include goats, sheep, cattle and giraffes, take their name from the first of four compartments in their stomach, the rumen. In it, food is broken down into solids and liquids by robust microbes, after which the partially digested solids, now called the cud, are regurgitated and re-chewed. [In Photos: Dazzling Headgear of Cows, Deer & Giraffes]

Waller says that so long as a cow is getting the proper ratio of carbohydrates, protein, vitamins and minerals, it shouldn't make any difference whether the rumen is churning candy or corn. And after reviewing a WPSD video of Watson feeding his cows and discussing his candy-supplemented nutrient regimen, Waller said the farmer's methods appeared sound.

"It looked to me like he was doing a good job; he's monitoring the amount of fiber he was putting in there," he said.

But, at least from a layperson's perspective, there's a gorilla in the room while watching the WPSD video: Watson's feed appears to contain wrapped candy. Waller admitted that there seemed to be candy wrappers in the feed, but he still wasn't alarmed.

"It didn't look like a tremendous amount [of wrappers]. If they're paper, those same microbes can digest that paper," he said.

And if they're plastic?

"They probably would just pass through. I think it would pass through just like excess fiber would," Waller said.