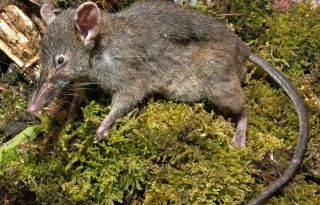 The rat lives in the Philippines and is the only known rodent species without molars.
(Image: © © Kevin Rowe)

A newly discovered rat in Indonesia doesn't have any molars, making it the only known rodent in the world without back teeth.

The long-snouted fuzzball has been dubbed Paucidentomys vermidax. "Paucidentomys" translates roughly to "few-toothed mouse," while "vermidax" means "worm devourer" — a reference to the new species' diet.

"When we caught the animal, we were in the forest, and we knew right away that it was something different," said Jacob Esselstyn, a postdoctoral researcher in biology at McMaster University in Ontario, Canada. "But we couldn't see inside of its mouth, so had no idea of the unusual lack of teeth."

Esselstyn and his colleagues caught two specimens of the rat in pitfall traps on Sulawesi Island in Indonesia. These traps are essentially buried buckets, with tops level to the ground so that any small mammal running across the forest floor will fall in.

The rats live in wet, mossy forests at high elevation, Esselstyn told LiveScience. It's not yet clear how common they are, though they do seem difficult to trap. One of the rats had a stomach full of worm segments and nothing else, suggesting that the rodents eat mostly or only earthworms. [See Photos of the New Rat]

What makes Paucidentomys vermidax unique among rodents is its teeth. Every other rodent species ever discovered has molars for grinding food, Esselstyn said. P. vermidax has none. The rat also has unusual incisors at the front of its mouth. Instead of being wedge-shaped for gnawing like most rodent incisors, this rat's teeth are double-pointed bicuspids.

These odd teeth "may be used to cut or to tear earthworms into segments, but we don't really know how that works," Esselstyn said.

The likely closest relative of the new rat does have molars, Esselstyn said, suggesting that this rat lost its back teeth at some point during its evolutionary history. The ability to grind and gnaw has helped rodents become one of the most successful groups of mammals on the planet, Esselstyn said, adding that it's interesting this particular species has reversed that trait.

"It's just a good illustration of how much biodiversity is out there that we're not yet aware of," he said.

The researchers announced the find today (Aug. 21) in the journal Biology Letters.

Editor's Note: This story has been updated to correct the rat's location. It is found in Indonesia, not the Philippines.