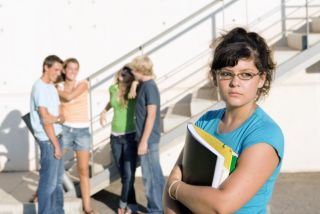 Some teens are simply shy, while others have a social phobia, researchers are finding.
(Image: © MANDY GODBEHEAR | Shutterstock)

Shy people may be hesitant to look you in the eye, but they seem to have a superior ability to recognize certain facial expressions, a new study suggests.

In the study, college-age adults who were shy were better able to recognize expressions of sadness and fear compared with those who were not shy.

The findings were surprising, said study researcher Laura Graves O'Haver, a doctoral student at Southern Illinois University at Carbondale, given that previous work has found shy people tend to misinterpret facial expressions. However, this earlier work was typically performed on children, and the ability to recognize facial expressions may change with age, Graves O'Haver said.

The new results put a positive twist on a trait that is usually considered unfavorable, she said.

"We tend to give shy people a bad rap," but the new study suggests there are some strengths to being shy, Graves O'Haver said. "It might be nice to focus on those strengths."

Graves O'Haver presented her findings this month at the American Psychological Association meeting in Orlando, Fla.

Graves O'Haver analyzed information from 241 college students (average age of 19) who took an online survey. Participants were shown 110 pictures of faces and asked to identify the facial expression represented by each picture (happy, sad, anger, fear, surprise, disgust and a neutral expression.)

To determine their level of shyness, participants were also asked whether certain statements were true for them, such as "I feel tense with people I don’t know well," "I find it difficult to ask for information," and "I'm uncomfortable at parties." [Life's Extremes: Outgoing vs. Shy]

Overall, people were able to identify the facial expressions quite well, with an 81 percent accuracy rate.

When asked how they were feeling during the study, shy people were more likely to be in a negative mood. This could, in part, explain the results, because studies have found that people in a bad mood tend to see other things in a negative light, "kind of like the opposite of rose-colored glasses," Graves O'Haver said.

It's also possible the superior ability to recognize sad and fearful facial expressions can contribute to people's shyness, Graves O'Haver said. If shy people see negative emotions on people's faces to a greater degree, "that could make you feel shy," Graves O'Haver said. "You might want to limit how much you look at faces," she said.

However, Graves O'Haver stressed the study only shows an association, and not a cause-effect link.

And because the study was conducted online, it's not clear how well the results would translate to a real-world situation, Graves O'Haver said. She would like to conduct another study in which the experiments more closely resemble a real-life conversation, perhaps through using videos instead of pictures.