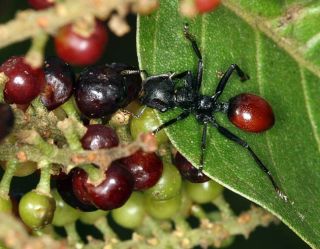 An ant crawls on a plant laden with red berries. Scientists have discovered that about one in twenty of the ants are infested with tiny worms, transforming their abdomens into bright red berry mimics. Birds likely mistake the foul-tasting insects for berries, spreading the parasites to other feces-gathering ant colonies.
(Image: © Steve Yanoviak, University of Arkansas)

Infectious stomach flus may be gut-wrenching for us, but consider the plight of some tropical black ants: When infected by tiny nematode worms, the ants' rumps resemble a bright-red, bird-attracting berry.

The parasites' strange transformative ability might help it spread to other ant colonies, scientists report in two new studies. Birds normally avoid eating the foul-tasting ants, but the berry-like temptation may be too much, said researcher Steve Yanoviak, an insect ecologist at the University of Arkansas in Little Rock.

"These ants are strange. Half of the solid material they bring into their nests is bird poop, which they feed to their larvae," Yanoviak said of the ant specie, Cephalotes atratus. "That sets the stage for an easy, consistent way for the nematodes to get into a colony."

When ants lug infected bird doo-doo into their colony and feed it to helpless larvae, Yanoviak said, the parasites migrate into their abdomens, or gasters.

Once settled into the pencil-eraser-sized gaster, the worms partially dissolve the insect's jet-black exoskeleton to make it translucent.

"When you combine that with the amber color of the eggs and shine sunlight on it, you get something that looks remarkably like a berry," Yanoviak told LiveScience, noting that the infestation also causes the ant's rear to stick up in the air. "We think birds confuse [the gaster] for local varieties of berries, completing the parasite's life cycle."

The infestation seems horrific, but Yanoviak said he isn't sure it reduces ant lifespan all that much.

"I've cut open a lot of these ants and their digestive tracts are still in tact," Yanoviak said, comparing the invasion to a wild case of tapeworms in humans. "The nutrition goes directly to the parasites, which makes for a scrawny ant, but I've tracked ants that lived for at least 3 months."

Ants unaffected by the parasite live for about 6 months, he said.

Yanoviak thinks the parasite evolved as a result of the unique relationship between tropical birds and their dung-recycling ants, which are also known for their mid-air gliding ability.

"You see similar parasites in fire ants and beetles from other regions, but they don't cause the red discoloration," Yanoviak said. "All the pieces seem to be in place for this parasite to evolve the way it did."

He explained that birds tend to carry a lot of parasites, and that the ants tend to collect bird droppings during the day. Over time, he noted, the parasite exploited the unoccupied ecological niche.

"There's almost no end to the amazing things that parasites can do," Yanoviak said, "no matter how simple they are."