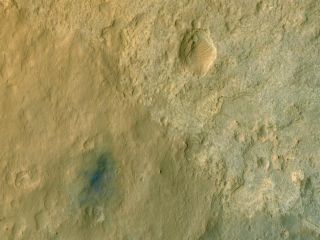 This color-enhanced view of NASA's Curiosity rover on the surface of Mars was taken by the High Resolution Imaging Science Experiment (HiRISE) on NASA's Mars Reconnaissance Orbiter as the satellite flew overhead. Colors have been enhanced to show the subtle color variations near the rover, which result from different types of materials.
(Image: © NASNASA/JPL-Caltech/University of Arizona)

A NASA spacecraft in orbit around Mars snapped a new, incredibly crisp color photo of the Curiosity rover on the surface of the Red Planet.

The photo was taken by the High Resolution Imaging Science Experiment (HiRISE) camera on NASA's Mars Reconnaissance Orbiter, which has been circling the Red Planet since 2006. The new image shows Curiosity at its Gale Crater landing site, with the effects of its rocket-powered descent to the surface clearly visible.

"The rover appears as double bright spot plus shadows from this perspective, looking at its shadowed side, set in the middle of the blast pattern from the descent stage," Alfred McEwen, HiRISE principal investigator at the University of Arizona in Tucson, said in a statement. "This image was acquired from an angle looking 30 degrees westward of straight down. We plan to get one in a few days looking more directly down, showing the rover in more detail and completing a stereo pair."

The photo also reveals spectacular details of the layered bedrock at Gale Crater, NASA officials said. As part of its mission, Curiosity will examine the crater's layers of rock and soil to determine whether Mars has an environment that is, or ever was, suitable for microbial life.

Engineers at NASA's Jet Propulsion Laboratory (JPL) in Pasadena, Calif. recently upgraded Curiosity's computers and software to prepare the rover for driving and using the tools on its robotic arm. Mission operators affectionately called this four-day procedure a "brain transplant," since it involved transitioning Curiosity from landing to now operating on the Martian surface. [Gallery: Curiosity's 1st Photos of Mars]

"We have successfully completed the brain transplant," Mike Watkins, Curiosity's mission manager at JPL, said in a statement. "Now we are moving on to a new phase of functional checkouts of the science instruments and preparations for a short test drive."

Curiosity is expected to take its first drive within roughly a week. The rover's first outing will likely include short motions forward and in reverse, and a turn, NASA officials said. Mission controllers will prepare and test each of the wheels' drive and steering motors before Curiosity is moved for the first time.

"It's fair to say that the scientists, not to mention the rover drivers, are itching to move," said Ashwin Vasavada, deputy project scientist for the Curiosity mission at JPL.

Curiosity, which is also known as the Mars Science Laboratory, touched down on Mars on the night of Aug. 5 (PDT; Aug. 6 EDT). NASA's Mars Reconnaissance Orbiter captured photos of the rover on its parachute as it descended to the Martian surface, and also observed the robotic explorer at Gale Crater one day after landing.

Scientists have been combing through photos taken by HiRISE and Curiosity's own cameras to narrow down potential areas for the rover to drive to and investigate in the future. Ultimately, Curiosity will explore a mysterious mountain, called Mount Sharp, which rises up three miles (4.8 kilometers) from roughly the center of Gale Crater.

"The science and operations teams are evaluating several potential routes that would take us to Mount Sharp, with perhaps a few waypoints to inspect some of the different terrains we've identified as we map the landing area," Vasavada said. "As we have reported many times before, it's going to take us a good part of our first year to make it to the layered sediments on Mount Sharp."

The $2.5 billion Curiosity rover will spend two years on the Red Planet investigating the Martian terrain. The 1-ton rover is NASA's most ambitious planetary science mission attempted to date.

This story was provided by SPACE.com, a sister site to LiveScience. Visit SPACE.com for complete coverage of NASA's Mars rover Curiosity. Follow SPACE.com on Twitter @Spacedotcom. We're also on Facebook and Google+.