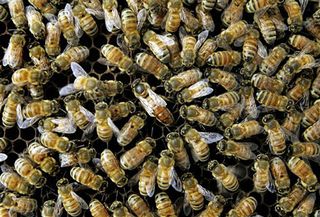 Honeybee queens have sex with harems of males apparently to give birth to much better dancers, research now reveals.

The better honeybees dance, the better they are at hustling for chow, scientists added.

Taking lots of male consorts is a dicey proposition for bee queens. For one thing, it increases their risk of catching sexually transmitted diseases. Also, if a queen's children have several fathers, they don't have as much in common with each other genetically speaking, which in theory could threaten how well they all get along.

Still, polyandry — where females each mate with several males — does happen among honeybees. Indeed, North American honeybee queens each have sex with an average of seven to 20 males, with the giant honeybee in Asia know to demand up to 104 mates.

"What really surprised us was the extent of difference," researcher Heather Mattila, a honeybee behaviorist at Cornell University in Ithaca, N.Y., told LiveScience. "In some colonies, you can see the less genetically diverse bees pretty much just standing still on the honeycombs on the videotape, while bees in the genetically diverse colonies are dancing or have left to go forage."

Mattila suspects that some males could result in better dancing progeny than others.

"Honeybees may look all the same, but they're not — some bees are better at some tasks than others," she explained. "So queens might mate with a lot of males to increase the likelihood of getting a drone that fathers good dancers, or produce workers want to follow good dances."

Genetic diversity is known to have other benefits for honeybees as well — for instance, it boosts a colony's resistance against disease, previous research has shown. Still, although polyandry is common in honeybees, it is rare in other bees, wasps and ants.

"It could be that genetic diversity is vital for getting enough food to feed huge, energetically demanding colonies," Mattila speculated. "Honeybees are unusual in that they tend to have massive populations and complex ways of communicating between nest mates, and it could be that once you reach a certain level of complexity, genetic diversity helps provide the productivity that is needed."

North Carolina State University apiculturist David Tarpy, who did not participate in this study, noted "it'll be fascinating to uncover the mechanisms behind this all, behind why genetic diversity affects honeybee behavior as it does."

The scientists will detail their findings online January 16 in the Proceedings of the Royal Society B.