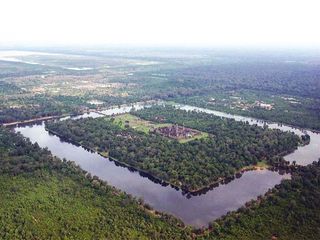 People in medieval times, such as the Khmers who built Angkor Wat (shown here), often used canals to supply water during droughts. However, technology often wasn't enough to maintain societies during the global warming that occurred then.
(Image: © Charles J. Sharp)

While people today are living through the first human-caused global warming event, we aren’t the first to ever live through climate change. For example, between the years 800 and 1400, the world was about 0.2 degrees Fahrenheit (0.1 degrees Celsius) warmer than the average for that millennium. The same period saw the rise and fall of great ancient civilizations, including the Maya of Central America and the Khmer Empire, which built Angkor Wat in present-day Cambodia.

Just as modern-day climate change is expected to, what scientists call the Medieval Warm Period brought new and more severe weather patterns to different parts of the planet. As people today consider geoengineering and other technology for combating the effects of anthropogenic climate change, InnovationNewsDaily took a look at the kinds of technologies and adaptations ancient cultures used when faced with altered temperatures, rainfall and droughts.

Two years is not enough: The Mayans

Even before the Medieval Warm Period, the Maya knew they lived in a tough environment that was prone to drought. “They were absolute maestros at water management and water storage," said archaeologist-turned-book author Brian Fagan. Fagan collected cultures’ responses to the Medieval Warm Period in his book, “The Great Warming: Climate Change and the Rise and Fall of Civilizations” (Bloomsbury Press, 2008).

The Mayans built hollow stone pyramids capable of holding enough water to irrigate farms during two or three years of drought. The Mayan nobility also built up elaborate rituals around water — a common human response to water scarcity, Fagan said — and told their people they communicated with the gods to bring rain and harvests.

When global warming brought longer droughts to the region than the pyramids could supply for, however, the common people rebelled and began abandoning the cities. Meanwhile, the nobility continued to wage wars against their neighbors, even as their food supplies dwindled. As their climate changed, they did little to adapt.

Along with social factors, the Mayans' inability to cope with extended drought brought about their downfall, argue Fagan and Gerald Haug, who studies ancient climates at the Swiss Federal Institute of Technology Zurich. About 90 percent of the Mayan population disappeared.

"It was one of the biggest collapses of human society that we know about," Haug said.

Learning from the past: The Chimu

About 2,000 miles south of the Mayans, the Chimu people of coastal Peru developed technologies to handle both floods and droughts. They learned from the mistakes of their predecessors, the Moche, whose population outstripped their food supply.

The Chimu were lucky. At the time, most people around the world died in their 20s, so it was difficult to pass wisdom down through the generations, Fagan said. Yet generational memory was crucial for people to survive climate change, he thinks. "You have to think and plan for future climate change in the long term," he told InnovationNewsDaily.

The Chimu built overflow weirs for their canals to prevent erosion during floods, but also used canals to irrigate distant fields during drier times. The leaders exerted tight control over their land, moving food or water from one area to another when disaster struck one river valley. The culture survived the Medieval Warm Period, falling only to Inca conquest in about 1470.

Good times for the Khmer

The effects of global warming in the Middle Ages weren't always negative. During this time, in present-day Cambodia, King Suryavarman II and his successors built the Angkor Wat and other temples using the labor of hundreds of thousands of common people. The society depended on rice paddies flooded by monsoon rains and irrigated by a complex system of canals.

The canals worked well during that time, when the monsoons in the region were plentiful, Fagan said in “The Great Warming.” At the end of the period, however, the climate shifted into to a cooler period called the Little Ice Age. The area may have experienced more droughts. The canals filled with silt and were too complex to overhaul, Fagan wrote.

The Khmer people dispersed, away from the cities, leaving their temples behind.

Not all tech: The Shoshone

Other ancient cultures adapted to climate change in other ways. "A lot of the responses are social institutions, behavior, long-term thinking," Fagan said.

In the American West, the Medieval Warming Period brought two extended droughts, one that lasted 100 years and another that lasted 140. The people who lived in the area adapted by being adaptable. They moved frequently over a large territory and ate a wide variety of plants and animals, which made their diet resilient to the failure of one plant species or another from lack of water. The Shoshone people of California lived as hunter-gatherers for 5,000 to 6,000 years, Fagan wrote, even in the face of climate change.

Ancient people were dependent on low-yield subsistence farming and could barely predict the weather, Fagan said, so they were much more vulnerable to climate change than people are now. Yet even in modern times, climate events can alter the course of human history. Scientists predicted the La Niña event that led to the drought and famine in the Horn of Africa that started July 2011. Yet people did little to prevent the famine until they began seeing news reports of deaths, Haug said. "Those societies in the past and today are not very fast in reacting those things," he said.

Haug and Fagan drew direct parallels between those ancient civilizations and the present day. For Fagan, that means people need to combine behavioral changes with technology. "Technology will be an enormously helpful partner," he said, "but the problems of anthropogenic global warming or global water supply will not be solved by technology."

Instead, he thinks, solutions lie in social attitudes: "The response to climate change, in the final analysis, in the future and in the past, is a matter of human behavior."