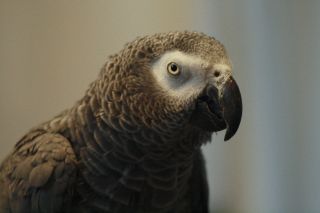 Parrots can draw conclusions about where to find a food reward not only from clues as to its location, but also from the absence of clues — an ability previously only seen in humans and other apes.

In a new study, researchers tested African Grey parrots on their reasoning abilities by shaking empty boxes and boxes filled with food so that the parrots could hear the snacks rattling around. To pick the box that would win them a treat, the parrots had to figure out that the sound indicated food and that a lack of sound from one box probably meant food in the other. It's a challenge that even human children can't reason through until about age 3.

"It suggests that Grey parrots have some understanding of causality and that they can use this to reason about the world," study scientist Christian Schloegl, a researcher at the University of Vienna, told LiveScience.

African Grey parrots are known to be clever, as are many other birds. In earlier studies with Grey parrots, researchers have shown them two opaque boxes, one full of food and one empty. When the parrots are shown that one box has no food in it, they almost always pick the second box in search of a treat. [Pretty Bird: Images of a Clever Parrot]

This could be because the parrots infer that if one box is empty, the other is likely full, Schloegl said. But researchers couldn't rule out that they were simply avoiding the empty box for some unknown reason.

To find out, Schloegl, along with fellow University of Vienna researcher Judith Schmidt and colleagues, set up a more challenging task. In their new study, six African Grey parrots were presented with two opaque boxes, one containing walnuts and one empty. Instead of showing the parrots the empty box, however, the researchers shook the boxes so the parrots could hear the walnuts inside.

In some cases, the researchers shook either both of the boxes or neither box. In others, they shook just the empty box or just the full one. They found that the parrots could correctly determine that a noisy box was a full box. Even more impressively, when presented with a box that made no sound when shaken, the birds consistently picked the other box, seemingly reasoning that it must be full.

The results, detailed today (Aug. 7) in the journal Proceedings of the Royal Society B, prove that parrots can make judgments based on sounds as well as sight. But the birds still might have been avoiding the silent box rather than making inferences about the other box.

To rule out that possibility, Schmidt conducted several similar experiments, varying the types of motion and combinations of shaking and sound. In the final test, she wore tiny speakers snaked through her sleeves and attached to her wrists. When she picked up the boxes to shake them, the noise didn't come from the boxes but from the speakers.

In some cases, the speaker noise matched Schmidt's actions: She'd shake the box in her right hand and the sound would come from the hidden speaker on her right wrist. In other cases, the noise played from the opposite side of the box that she was shaking.

The parrots, she found, picked the correct, food-filled box at rates greater than random chance only when the shaking and the recorded noise matched up. In other words, the birds saw the connection between the motion and the noise, and then made the logical leap to connect both, but not one or the other, with food.

"The most important point is that higher intelligence is nothing that evolved only once," Schloegl said. Instead, he said, "comparable cognitive skills evolved several times in parallel in only distantly related species such as primates and birds."