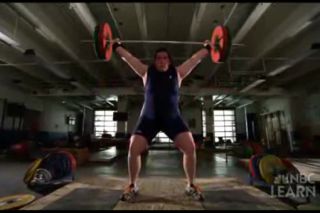 When she goes on stage, she, like every other weightlifter, uses not only strength, but also agility, judgment and many other athletic traits.

"Most of the time when people watch weightlifting in the Olympics, they have this idea it's just this big, strong guy with big muscles that's just going to lift a lot of weight," Robles said in an interview with the National Science Foundation (NSF).

Not so, said Brian Zenowich, a robotics engineer at Barrett Technology, where one of his projects is the Whole Arm Manipulator, a sophisticated mechanical arm that moves the way human arms do. [Watch video of Robles' key movements]

Besides strength, it takes a delicate dance of specialized movements to balance such high amounts of weight over a person's — or robot's — head, Zenowich said.

To figure out the physics behind Robles' accomplishments, he watched high-speed videos of Robles performing the clean-and-jerk and the snatch, the two lifts weightlifters perform in competition. He then tested Robles' techniques in his robot arm.

Zenowich found that by imitating the movements Robles makes, a robot could lift a dumbbell it couldn't lift otherwise.

"The balance, the speed, the agility, the posture, everything that goes into her lifts — it blows my mind," Zenowich said.