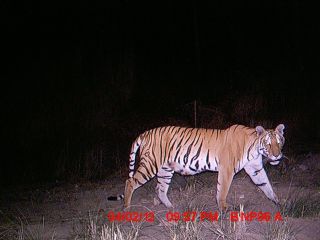 Camera traps in Nepal's Bardia National Park identified 37 tigers living in and near the park in 2011, a marked increase from two years before when only 18 were recorded there, according to the conservation group World Wildlife Fund (WWF).

Shubash Lohani, a researcher with the group originally from Nepal, credits the increase to a commitment by the Nepalese government to protect the endangered big cats and crack down on illegal poaching, as well as better training and resources given to park rangers, cooperation by local communities and improvements in grassland habitat.

The growth of the Bengal, or Indian, tiger populations in this region shows that the animals can rebound quickly if given the opportunity, Lohani told OurAmazingPlanet.

"This is a result of the government's commitment to doubling Nepal's tiger numbers [by 2022] and is proof positive that this goal is achievable if grassroots efforts by local communities and rangers on the frontlines of tiger conservation are complemented by high-level political support," he said.

The group has worked with the Nepalese government and local communities to double the number of guard posts in the park since 2008. Rangers have cracked down on poaching, arresting more 300 poachers and traders in the country in 2011 alone.

However, illegal hunting of the endangered cats throughout their range remains an enormous threat to their survival and is fueled by growing demand for their parts, which are traditionally thought to have medicinal value (despite strong evidence to the contrary), Lohani said.

Camera traps used in the study, published in an announcement by the government of Nepal, also found tigers moving through the Khata wildlife corridor to reach India's Katarniaghat Wildlife Sanctuary.

These wildlife corridors are vital for allowing the animals to move throughout their range, and in the future, the WWF plans to better protect and improve the habitats of these pathways in Nepal and elsewhere, Lohani said.

Researchers have improved grassland habitats by removing trees and conducting controlled burns over the past few years, which has allowed ungulates and other deer species — a primary food source for tigers — to thrive.

Tigers can have many offspring if they are healthy; photographs by tourists suggest that one Nepalese female has given birth to eight cubs in the past few years, Lohani said.

Camera traps took about 300 photographs of tigers in the park in 2011, from which 37 individuals were identified by their unique pattern of stripes, Lohani said.

In 2011, locals voluntarily gave up 135 guns to the park authorities as a result of grassroots anti-poaching activities supported by WWF Nepal. The group also works with 12 community-based anti-poaching units to help stop wildlife crime.

But there is still much work to be done if tigers are to be saved. "Although this is an encouraging result, we need more cooperation from other countries where tigers live to protect the animals, and to crack down on poaching and illegal trade in wildlife," he said.