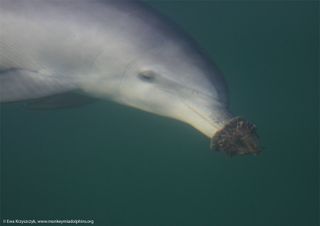 A juvenile bottlenose dolphin using a sponge on her nose as a tool to find food. She is the granddaughter of the first so-called sponger discovered in the mid-1980s.
(Image: © © Ewa Krzyszczyk, www.monkeymiadolphins.org)

For the bottlenose dolphins of Shark Bay, Australia, functional fashion seems to be all the rage, with inclusion in cliques dependent on whether one is wearing a nose sponge — a tool that helps dolphins find food — new research suggests.

The female dolphins that wear marine basket sponges on their beaks to scour the sandy bottoms of deep channels for fish associate more with each other than with non-sponge users, the researchers said. (Sponges are filter-feeding invertebrates that come in all shapes and sizes but tend to look like sponges, as they are porous.)

These results initially surprised study co-author and behavioral biologist Janet Mann of Georgetown University in Washington, D.C.  Sponge-using dolphins, called spongers, are solitary for the most part. "[At first] it seemed like the spongers weren’t that interested in a social life," Mann said.

But over 22 years of observing the Shark Bay dolphins, a pattern emerged, and "it seemed [the spongers] were going out of their way to hang out with other spongers," Mann said.

Mann and her colleagues compared the strength of social connections between both male and female spongers and non-spongers that lived in the same area, thereby eliminating differences in habitat that could potentially affect grouping behavior.

The scientists found that although the 36 male and female spongers associated with non-spongers, the tool-using dolphins weren’t central figures in Shark Bay dolphin society due to their isolating lifestyle. But 28 female spongers did form strong groups, or cliques, with other spongers who weren't necessarily related to them, the researchers report in a paper published online today (July 31) in the journal Nature Communications. The remaining eight male spongers tended to associate with non-spongers, researchers noted.  [Creative Creatures: 10 Animals That Use Tools]

Sponging is a complex hunting tactic passed down from mother to offspring. It involves learning where sponges grow, picking the right one, prying an intact sponge from the sea bottom, and using it on their noses to root around the right areas to find fish concealed in the sand.

The fact that a socially learned behavior draws these dolphins together is an important distinction from why other animals form groups, Mann says. Circumstances, such as a communal food source, may draw animals together. Or individuals may pick up behaviors from others in their group.

But coming together because of similar behaviors learned elsewhere is what makes Shark Bay spongers a cultural first among animals, Mann and her colleagues write in their study.

Past research has found these Australian dolphins are free spirits of sorts, with the females moving freely between males in different groups.