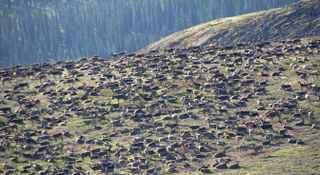 Humans are not the only creatures bothered by mosquitoes and flies. They harass caribou so much that earlier this month, about 300,000 of the animals huddled closely together in Northwest Alaska to avoid being bitten and parasitized.

It's one of the most spectacular gatherings of wildlife in the world, rivaling the migratory herds of Africa's Serengeti, said Kyle Joly, a wildlife biologist with the National Park Service based in Fairbanks, Alaska.

Joly took several photos of the animals while flying a Cessna 185 earlier this month, near Cape Krusenstern National Monument and Noatak National Preserve.

"The bugs on the North Slope are pretty ferocious," Joly told OurAmazingPlanet. "The mosquitoes just harass them 24 hours per day." The warble flies and nasal bots that are out now are even worse in some ways, he said; the warbles try to lay eggs on the animal's sides and the bots try to fly up caribou nostrils to deposit eggs.

To avoid the flying pests, caribou move inland and into higher elevations where there are fewer winged menaces. This forces them closer together in groups called aggregations, which reduces each individual's exposure in terms of relative numbers of bugs and body area open to harassment.

These caribou are part of the west Arctic herd, the largest in the United States, which numbers about 325,000 and was last counted in 2011, Joly said. Alaska Department of Fish and Game staff actually counted the animals one-by-one using aerial photographs, he said.

Caribou give birth to calves in the beginning of June, so the young now are about a month old. "They are precocious," Joly said. "At an hour, they're already walking. By a day, they're running. By three days, they are what most people consider fully mobile; a person couldn't keep up."

Caribou are preyed upon by wolves, grizzly bears and humans. People hunt an estimated 15,000 caribou per year. Annually, the population is declining by about 5 percent, Joly said.

Northwest Alaska remains sparsely populated, although considerable development is planned in the area in the near future for petroleum and mineral exploration and mining, which threatens to disrupt caribou migration and degrade the animal's habitat.

After the threat from insect harassment diminishes, the caribou splinter as quickly as they came together and spread out throughout the Brooks Range and North Slope before coming together again to migrate south during the fall.