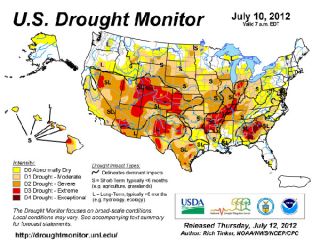 A map of national drought conditions as of July 10, 2012.
(Image: © USDA/National Drought Mitigation Center/Dept. of Commerce/NOAA)

Nearly two-thirds of the continental United States is in the grip of a drought, threatening agriculture, particularly corn, and prompting the U.S. Department of Agriculture to declare a disaster in more than 1,000 counties in 26 states — the largest disaster in the history of the program.

A combination of factors, including the heat wave that hit much of the country in June and earlier this month, are blamed for the drought, which rivals the geographic extent of the multiyear droughts of the 1950s and the 1930s, a decade marked by the historic Dust Bowl that devastated agriculture in the central United States.

But while the USDA designated it to be the largest single disaster of its history effective July 12, the drought itself is not breaking records.

Large, but not unprecedented

In terms of the area affected, the current drought is parching a similar amount of land as the multiyear droughts of the '50s and '30s; however, it is not as severe or as long-lasting, said Mark Svoboda, a climatologist with the U.S. National Drought Mitigation Center at the University of Nebraska-Lincoln.

While Texas, Oklahoma and the southeast plains are entering their second year of drought, much of the area affected this summer was not hit last year, Svoboda said. [Dry and Dying: Images of Drought]

He refers to  the current drought in the Midwest as a "flash drought," because it arrived in a time frame of weeks to months, relatively fast for a drought. The mild winter this year didn't recharge soil moisture and the heat wave that arrived in late June pushed some places over the cliff, Svoboda said.

This drought hit at a critical time for corn, with devastating effects for the future harvest, Svoboda added.

Tom Vilsack, the USDA secretary, noted that the forecast for other agricultural products, including soybeans and livestock, had been hurt by the drought, and on July 11, announced a streamlined disaster designation process intended to get aid to affected areas more quickly, as well as other changes.

While the unusual heat has contributed to the drought — June ushered in the warmest 12-month period since record-keeping began for the continental United States in 1895 — it isn't the only cause. La Niña also played a part.

Part of a natural climate fluctuation, a La Niña event is associated with cooler ocean surface temperatures in the equatorial Pacific Ocean. La Niña affects weather patterns around the world, and in the southern part of the United States, it is associated with dry weather. Both this year and last saw La Niña events, contributing to the current drought.

The configuration of the jet stream, a band of high-altitude westerly winds, also contributes, although its current position, to the far north above the continent, is not uncommon for summer, according to Mike Brewer, a physical scientist with the National Oceanographic and Atmospheric Administration. The jet stream's position keeps cooler air locked further north above it and lets warmer, more southerly air dominate over much of the United States.

Whether or not global warming is also a contributing factor is more difficult to say.

"In global warming, we expect more extremes, more droughts, more heavy precipitation. But we can't attribute this to global warming," Brewer said. "This is inside the realm of what we have seen before as evidenced by the '30s and '50s, when things were even worse."

But he added: "If you look at global temperature, it is certainly on the way up from what we can tell."