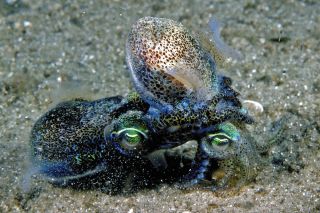 Two southern dumpling squid mate, the male grasping the female. These sessions can go on for hours.
(Image: © Mark Norman )

If you've ever felt sleepy after sex, you're not alone. New research finds that after a long bout of mating, squid are too tired to do much swimming.

The findings highlight the cost of getting busy, according to the study published today (July 17) in the journal Biology Letters. Being worn out from sex could keep a squid from finding food, avoiding predators or mating again, said study researcher Amanda Franklin, who conducted the study as a graduate student at the University of Melbourne in Australia.

"Understanding the costs of mating can provide important information regarding the evolution of reproductive strategies and aging," Franklin wrote in an email to LiveScience.

For some animals, the drive to mate requires the ultimate sacrifice. Consider the male orb-web spider, which gives itself as food to the female during mating, prolonging the act and making it more likely his genes will get passed on. But at the bare minimum, sex requires effort and energy for all animals.

That's especially true of the southern dumpling squid (Euprymna tasmanica), a round-bodied little cephalopod just 2.8 inches (7 centimeters) long. Dumpling squid live fast and die young, mating with multiple partners during their yearlong lives,. They make their time count, engaging in sexual encounters that can last up to three hours each.

During these trysts, the male clings to the female, grasping her and blowing water into her mantle, the bulbous part of her body behind the head. Franklin and her colleagues wanted to test just how exhausting this ritual is.

The researchers captured wild dumpling squid off the coast of southeast Australia, and placed them in tanks. Each squid was given an endurance test in a tank where flowing water acted as a squid treadmill, forcing the critter to swim or be plastered against the back of the tank. The length of time the squid swam until exhaustion marked their baseline endurance.

The next day, 30 of the squid were put in male-female pairs for mating (another 17 were kept away from the opposite sex and used as a control group). Immediately after sex, the squid swam against the current again. It was soon clear that the postcoital period was doing them no favors.

"We found that squid could swim for half as long after mating, and would take up to 30 minutes to restore their swimming endurance to pre-mating levels," Franklin said. The same was true for both males and females, the researchers found.

That means less energy for foraging, avoiding predators, growing and finding future sex partners, she said. Ongoing experiments suggest that this high-intensity mating may even be part of the reason that dumpling squid have such short life spans, though those results are preliminary, Franklin said.

"Using the southern dumpling squid as our research species can help us to understand reproductive behavior of other cephalopods (squid, octopus, cuttlefish and nautilus) as well as other species with similar mating systems (e.g. long copulation durations, frequent mating)," she said.