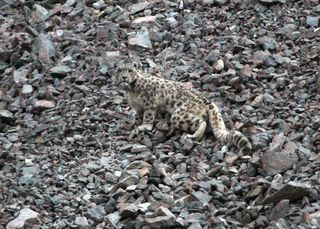 Scientists have outfitted two snow leopards in a wild corner of Afghanistan with satellite-tracking collars, a first for the country and a boon for researchers trying to better understand the habits and favored habitats of the endangered cats.

The snow leopards, both male, were captured in Afghanistan's northeastern Wakhan Corridor, a narrow strip of desolate, windswept mountains sandwiched between Pakistan and Tajikistan, and a spot where camera traps first snapped the elusive cats in 2011.

The first snow leopard was captured and released on May 27, the second on June 8.

Researchers weighed and measured the animals, took DNA samples and fitted them with satellite collars before sending them on their way.

A film crew from Nat Geo WILD was on hand to document the research, for a film that is slated to air in December.

Snow leopards make their homes in the harsh, rugged mountain regions of 12 Asian nations, yet despite their wide range and impressive survival skills, the spotted cats' numbers are dwindling. The species has declined by as much as 20 percent in the last 16 years, and only 3,000 to 7,500 individuals remain in the wild, according to population estimates.

Officials with the WCS lauded the recent capture and tracking of the Afghan snow leopards as a milestone in the fight to save the big cats.

"The information garnered from the tagging will assist researchers as they learn more about the range, behavior, movements and habitat used by snow leopards," Peter Zahler, WCS's deputy director of Asia Programs, said in a statement.

That information will be shared with the Afghan government and local communities to design protected areas and improve conservation strategies in the country, he said.

The announcement comes on the heels of other encouraging snow leopard news from Mongolia. For the first time ever, researchers uncovered a snow leopard den in that country, and caught a mother and two tiny snow leopard cubs on video.