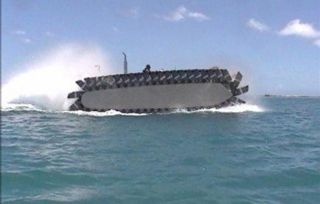 The U.S. military is testing inflatable tank treads for an amphibious vehicle to carry supplies from ship to shore.
(Image: © DARPA)

When U.S. Marines assaulted Pacific island strongholds during the last years of World War II, they relied on amphibious tractors capable of swimming with their tank treads. Today, the U.S. military has begun testing inflatable tank treads to carry supplies from ship to shore during disaster relief operations.

The inflatable tanklike treads of the Captive Air Amphibious Transporter (CAAT) can separate into flat panels to push on the water like a paddleboat. That enables the CAAT to not only swim, but also to crawl across sandy beaches, mud, ice fields and even sea walls — making it ideal for delivering cargo or troops in harsh conditions following a mega-disaster such as an earthquake or tsunami.

"The CAAT works very much like a tank, with moving tracks that are driven by a sprocket or drive wheel," said Scott Littlefield, program manager for the U.S. Defense Advanced Research Projects Agency (DARPA). "However, unlike the metal treads on a tank, the CAAT has large buoyant treads, that are either inflated with air or filled with a lightweight foam."

DARPA teamed up with the Office of Naval Research to make the CAAT as part of a project to aid disaster relief operations. The same effort has also led to flying robots that use parasails to deliver cargo from ship to shore. [Pentagon Floats Parachuting Robots for Disaster Relief]

The CAAT's inflatable treads help the vehicle — each weighing thousands of pounds — float on water. They also work like tires on land to spread the weight of the vehicle to just 2 pounds per square inch of pressure, Littlefield told InnovationNewsDaily.

Tests with a small-scale prototype of the vehicle have shown how it can drive right up onto land from water, as well as travel across beaches and mud. The CAAT has also successfully climbed over a 1-foot wall to go from water to the deck of a barge.

Just as importantly, the CAAT consists of parts that can be taken apart and stored inside of standard cargo containers — the same ship containers that carry everything from TVs to iPads across the world's oceans. That enables regular cargo ships to act as mobile bases for delivering humanitarian supplies during the worst disasters, rather than requiring specialized U.S. Navy ships.

"The CAAT is a versatile technology that can be scaled to accomplish a variety of amphibious missions, including delivery of personnel, rolling stock, general cargo and enable petroleum delivery," Littlefield said.

DARPA has wrapped up its work on the amphibious vehicle, but the Office of Naval Research continues to consider whether the inflatable technology can also work for the Navy or Marine Corps. The U.S. Marines currently rely upon hovercraft and a tracked amphibious assault vehicle for beach assaults or landing operations.