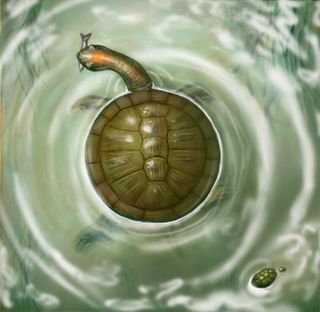 The round shape of a new species of fossil turtle, reported July 11, 2012, and found in Cerrejon coal mine in Colombia, would have meant more surface area to be warmed by the sun.
(Image: © Liz Bradford)

A newfound giant turtle that lived 60 million years ago in what is now northwestern South America would have been more than a mouthful for a neighboring predator, the world's largest snake Titanoboa.

The turtle's huge carapace, or shell, was nearly circular, like a tire, the researchers said.

The fossil turtle was discovered in Colombia's La Puente pit in the Cerrejón Coal Mine, made famous for its other treasures, including the extinct Titanoboa cerrejonensis, two crocodile species, Cerrejonisuchus improcerus and Acherontisuchus guajiraensis, as well as two turtle species, the small-car-size Carbonemys cofrinii and the thick-shelled Cerrejonemys wayuunaiki. (C. improcerus would have been an easy meal for the 45-foot, or nearly 14 meters, Titanoboa snake, said researchers who discovered the 6- to 7-foot-long crocodile.)

Named Puentemys mushaisaensis after the pit where it was found, the turtle, whose shell would have extended 5 feet (1.5 m) across, adds to growing evidence that tropical reptiles ballooned after the dinosaurs were wiped out.

Even with its mouth wide open, Titanoboa wouldn't have been able to down this turtle, not whole at least. And its round, low-domed shape would have increased the surface area exposed to the sun to keep the cold-blooded turtle warm, said study researcher Carlos Jaramillo of the Smithsonian Tropical Research Institute in Panama.

"The shell was far more rounded than a typical turtle," Jaramillo told LiveScience.

Various factors, including plentiful food, fewer predators, large habitat and climate change, would have worked together to allow turtles and other animals to reach such relatively gargantuan sizes, scientists have suggested.

For instance, the warm weather where would've been beneficial for P. mushaisaensis and other ectotherms that rely on their surroundings to regulate their body temperature.

Editor's Note: This article was updated to correct a sentence about the 6- to 7-foot crocodile; it inaccurately said "snake."