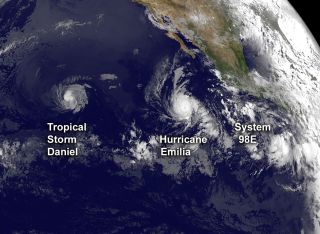 The Pacific Ocean is churning with activity, as can be seen in a satellite image taken by the GOES-15 satellite on July 10, 2012, which shows three storm systems trailing one another across the ocean basin.
(Image: © NASA/NOAA)

The Pacific Ocean is churning with activity, as can be seen in a new satellite image that shows three storm systems trailing one another across the ocean basin.

Tropical Storm Daniel is moving west toward Hawaii, followed by Hurricane Emilia. Just off the coast of Mexico, another possible tempest, known as System 98E, is brewing. As of this morning (July 11), the U.S. National Hurricane Center in Miami gives this system an 80 percent chance of becoming a tropical cyclone (the blanket term for tropical storms and hurricanes) in the next 48 hours.

Born as a tropical depression on July 4, Daniel became a Category 2 hurricane by midday on Sunday (July 8), making it the third hurricane of the season for the Pacific basin. It has since weakened and is now a tropical storm once more.

Hurricane Emilia, followed right on Daniel's heels, becoming a hurricane Monday (July 9). It grew rapidly and become a Category 4 hurricane on the Saffir-Simpson Scale by yesterday morning, making Emilia the strongest storm of the season so far in either the Pacific or Atlantic basins.

The strength that Hurricane Emilia gained can be seen from features in an image taken by NASA's Terra satellite on July 9. According to the satellite's measurements, the top of Emilia's swirling clouds were bitter cold, measuring minus 94 degrees Fahrenheit (minus 70 degrees Celsius). That indicates that the clouds are very high and that the storm packs a powerful punch. Luckily, it poses no threat to land.

All three storms can be seen in an image taken by the GOES-15 satellite on Tuesday morning (July 10).