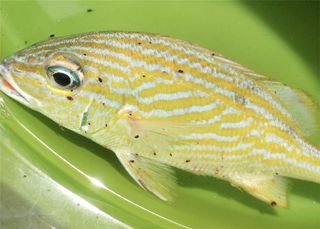 A Caribbean fish known as the French grunt that is infested with gnathiids.
(Image: © Elizabeth Brill.)

The late Jamaican musician Bob Marley has joined the "I have a species named after me" club, as a parasitic crustacean has been donned Gnathia marleyi, researchers announced today (July 10).

This blood feeder infests certain fish that live among the coral reefs of the shallow eastern Caribbean Sea.

"I named this species, which is truly a natural wonder, after Marley because of my respect and admiration for Marley's music," Paul Sikkel, an assistant professor of marine ecology at Arkansas State University, said in a statement. "Plus, this species is as uniquely Caribbean as was Marley."

Marley now belongs to a club that includes President Barack Obama, whose name inspired Caloplaca obamae, the moniker for a lichen growing on Santa Rosa island in California. Late-night comedian Stephen Colbert has two insects named for him, while Mick Jagger's name was given to an extinct trilobite, Aegrotocatellus Jaggeri. Even singer Beyoncé is a card-carrying member, with a species of horse fly with a golden rear now named Scaptia (Plinthina) beyonceae. [StarStruck: Species Named After Celebrities]

Juvenile gnathid isopods hide within coral rubble or algae so they can launch surprise attacks on fish, and then infest them. As adults, the parasites don't eat. "We believe that adults subsist for two to three weeks on the last feedings they had as juveniles and then die, hopefully after they have reproduced," Sikkel said in a statement.

With reports suggesting coral reef communities in the Caribbean are declining due to diseases, Sikkel's team is examining whether there's a link between reef health and gnathid populations. G. marleyi, like other gnathids, is similar to blood-sucking ticks or mosquitoes.

And like the land-lubbing ticks, gnathids are responsible for many diseases, in thise case those afflicting coral-reef fish, the researchers said. "We suspect that coral degradation leads to more available habitat for external parasites to 'launch attacks' on host fishes," he said. "And as the number of potential host fish decreases, each remaining host will become more heavily parasitized."

Sikkel first discovered the newly identified gnathid about 10 years ago in the U.S. Virgin Islands, where it was so common he assumed it had been described. Not so, according to Nico J. Smit of North-West University in South Africa, who later examined a specimen of the species. Next, the research team raised the organism from its juvenile stage through adulthood.

Sikkel and his team describe all of G. marleyi's life stages in the June 6 issue of the journal Zootaxia.