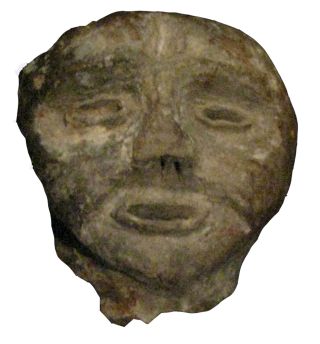 A tantalizing glimpse at the faces of the people of the Mantle site.
(Image: © Owen Jarus)

Today New York City is the Big Apple of the Northeast but new research reveals that 500 years ago, at a time when Europeans were just beginning to visit the New World, a settlement on the north shore of Lake Ontario, in Canada, was the biggest, most complex, cosmopolitan place in the region.

Occupied between roughly A.D. 1500 and 1530, the so-called Mantle site was settled by the Wendat (Huron). Excavations at the site, between 2003 and 2005, have uncovered its 98 longhouses, a palisade of three rows (a fence made of heavy wooden stakes and used for defense) and about 200,000 artifacts. Dozens of examples of art have been unearthed showing haunting human faces and depictions of animals, with analysis ongoing.

Now, a scholarly book detailing the discoveries is being prepared and a documentary about the site called "Curse of the Axe" aired this week on the History Channel in Canada.

"This is an Indiana Jones moment, this is huge," said Ron Williamson, an archaeologist who led dig efforts at the site, in the documentary shown in a premiere at the Royal Ontario Museum. "It just seems to be a game-changer in every way." [See Photos of the Mantle Site Artifacts]

Williamson is the founder of Archaeological Services Inc., a Canadian cultural resource management firm that excavated the site.

"It's the largest, most complex, cosmopolitan village of its time," said Williamson, also of the University of Toronto, in an interview with LiveScience.  "All of the archaeologists, basically, when they see Mantle, they're just utterly stunned."

Scientists estimate between 1,500 and 1,800 individuals inhabited the site, whose fields encompassed a Manhattan-size area. To clothe themselves they would have needed 7,000 deer hides annually, something that would have required hunting about 26 miles (40 km) in every direction from the site, Williamson said.

"When you think about a site like Mantle, 2,000 people, massive stockade around a community, a better analogy is that of a medieval town," Jennifer Birch, a post-doctoral researcher at the University of Georgia, said in the documentary. "While the cultures are very different, the societal form really isn't."

Despite its massive size, the site remained hidden for hundreds of years, likely escaping detection because its longhouses were primarily made of wood, which doesn't preserve well.

Charred wood found in one of the post moulds suggested that when one of the longhouses burnt down the rest of the settlement was saved. Williamson said that this is remarkable considering the longhouses were made of wood, which was very flammable, and close together. "Somehow their 'fire department' did that." [Photos: The Life and Death of Ancient Urbanites]

Another curious discovery at Mantle is its apparently cosmopolitan nature. The art and pottery at the site show influences from all five nations of the Iroquois to the south in New York State, suggesting extensive contacts and trade.

For instance, among Mantle's discoveries are the earliest European goods ever found in the Great Lakes region of North America, predating the arrival of the first known European explorers by a century. They consist of two European copper beads and a wrought iron object, believed to be part of an ax, which was carefully buried near the center of the settlement.

A maker's mark on the wrought iron object was traced to northern Spain, and the fact that it was made of wrought iron suggests a 16th-century origin. In fact, in the early 16th century Basque fisherman and whalers sailed to the waters off Newfoundland and Labrador. It's believed that it would have been acquired by the aboriginal people there and exchanged up the St. Lawrence River until eventually reaching Mantle.

The people of Mantle, it seems, were on trading relations with the Iroquois of the St. Lawrence.

"Historically, we know that the Huron and the Iroquois were not only at odds, they were mortal enemies," Williamson said in the documentary.

In the period before Mantle there is evidence of widespread warfare throughout southern Ontario and New York as well as parts of Michigan and Quebec, a period known as "the dark times." Human remains from that period show evidence of scalping and torture.

Mantle, with its large size and palisade defense, may have discouraged this type of warfare, making an attack risky. Other settlements in southwest Ontario were getting larger and sites in New York were clustering together, suggesting that they too were becoming harder to attack.

Birch compares the situation at Mantle and other sites to what happened after World War II, with the formation of the United Nations and NATO, institutions that discouraged warfare, allowing for trade and cultural interaction.

Williamson noted that, sadly, with the arrival of Europeans, this peace did not last, with warfare intensifying in the 17th century. "When Europeans arrive the whole thing is re-fired over economic reasons related to the fur trade," he said in the interview.

Today, seven years after excavations wrapped up, only a small portion of the site  remains as houses were built on top of it after the dig was complete. "We did not have the planning legislation in place to preserve these sites like we do today," Williamson told LiveScience. "If the site were found today there would be far more exploration of options to preserve it."

However, while the site is mostly built over, the modern-day town where Mantle was discovered — Whitchurch-Stouffville — is commemorating the Wendat's history in the community. The town recently opened Wendat Village Public School and the mayor will display the Huron Wendat flag in his office.