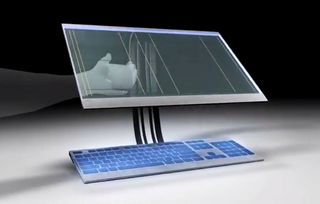 Hewlett Packard secured a patent for a method of making a science fiction-like see-through screen. This screenshot from a concept video shows what the screen would look like.
(Image: © From "360 View of the HP ThruScreen" by HP Computers Channel on YouTube)

Hewlett-Packard has secured a patent for a see-through screen that might be used to display directions on a car windshield or advertising on windows, the BBC reported.

Users could also hold the screen up to an object to see information about the object. "For example [the] see-through display may be placed upon a map so as to provide an observer with a navigation route," the screen's inventors wrote in their patent filing.

The patent describes a particular way of making the screen. It has at least one series of slats, like vertical blinds, sandwiched between two layers of a transparent material. The blinds let some light through the screen, so viewers can see objects placed behind the screen. At the same time, the blinds also reflect some light at viewers, to display text or graphics. The BBC pointed to a concept video that shows what a transparent computer screen would look like.

TV anchors' tele-prompters and heads-up displays, such as Google Glasses, already have see-through screens, but those screens work differently, according to Hewlett-Packard’s patent filing. They have a thin, reflective layer painted on top of a transparent material. [Google Demos Latest Version of Computing Glasses]

Compared to current see-through screens, Hewlett-Packard's slat method should make a screen that is thinner, works better with full-color graphics, is viewable from more angles and displays graphics to viewers on both sides of the screen, according to the patent. The patent also covers making the screen flexible enough to be rolled up for storage.

Hewlett-Packard hasn't put its see-through display in any products yet, but the BBC talked with an analyst who said the company has been working on this technology for 20 years and is serious about perfecting it and marketing it.