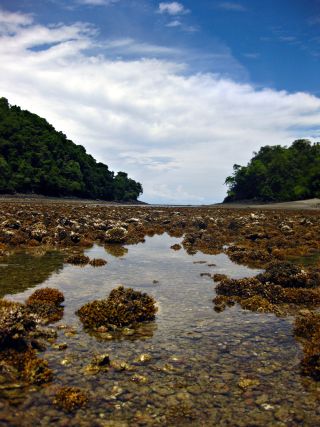 An exposed coral reef in Panamá. Exposures during La Niña events, such as this one in 2010, kill the corals en masse. Frequent La Niña events helped drive a long-term collapse of reef ecosystems across the Pacific, which began around 4000 years ago and lasted 2500 years.
(Image: © Lauren Toth)

Coral reefs off the coast of Panama collapsed for some 2,500 years, during a time of intense shifts in oceanic temperatures, found a new study. But when conditions returned to normal the corals came back, and they have thrived since then for more than a millennium.

The study offers both worrisome and hopeful news for coral ecosystems.

First the bad news: Especially strong and frequent El Niño and La Niña conditions, which caused the long-term decimation of Pacific corals in ancient times, are projected to become more common with climate change in the coming decades. That could mean that corals, which already face numerous threats, may be powerless in the face of global warming.

The good news is that corals were able to recover once, and that was after many hundreds of years of collapse. That suggests that the vulnerable ecosystems could also bounce back in the future, as long as climatic conditions improve.

“The real message here is that corals do have the resiliency to recover,” said Richard Aronson, a coral reef ecologist and paleobiologist at the Florida Institute of Technology in Melbourne. “It happened 1,500 years ago after 2,500 years of nothing, so it could happen again.

“But the other side is that many reefs are already damaged,” he added. “To make reefs recover, we have to do things to address greenhouse gas emissions to mitigate and reverse climate change. And we have to address local threats, like clear-cutting of forests, which sends sediment and nutrients into the water.”

During an El Niño year, warmer-than-usual water flows into the eastern Pacific, and waters become still as upwelling stops. Combined, Aronson said, these conditions cause corals to essentially puke up their zooxanthellae, the symbiotic algae that live inside corals and, as they photosynthesize, feed their hosts. As corals lose their colorful residents, they turn white and die through a process known as bleaching.

In 1998, a strong El Niño event killed more than 16 percent of corals around the world. That made Aronson and colleagues wonder whether anything so extreme had happened to corals in the past.

To find out, they jammed a 17-foot long pipe of agricultural tubing into 14 sections of dead reef in the tropical Pacific off the coast of Panama. What they pulled out represented 6,000 years of history on the reef, which they were able to date, layer by layer, using a combination of methods.

For the first couple thousand years of the column’s history, coral skeletons looked healthy and well shaped, showing that they were growing rapidly on top of each other toward the surface. But then the researchers came upon a layer of chewed-up, poorly formed corals, suggesting that the reefs at that time were stagnating on the bottom of the sea.

The unhealthy layer was thin, but the researchers were surprised to find that it represented 2,500 years of history. From 4,000 to 1,500 years ago, the team reports today in the journal Science, corals remained in a devastated state of collapse in the eastern tropical Pacific. That period of ruin represented 40 percent of the entire history of the reef.

A look at climate records showed that the coral collapse coincided with a volatile time for the El Niño-Southern Oscillation, which describes the pattern of El Niño and La Niña systems in the Pacific. Both were occurring more often and more intensely than usual. As these systems calmed down, corals began to grow again.

Even conservative climate change scenarios forecast an increase in extreme events, including El Niño and La Niña events, in the next few decades, Aronson said. And some predictions are calling for bleaching events every other year, which could quickly lead to another coral collapse.

The new study, along with other work on the surprising resiliency of corals, offers some hope that reefs may be able to adapt to or rebound from future threats, said Erik Cordes, a marine ecologist at Temple University in Philadelphia. But corals won’t recover without some help from people.

“We may not be able to correct what we’ve already done to the earth’s atmosphere and climate,” Cordes said. “But if we take steps now to mitigate our effects on global climate in the coming years, corals might rebound.

“It’s a mixed message,” he added. ”It’s evidence that all hope is not lost and that there’s still time to make changes and to save some of the world’s coral reefs.”