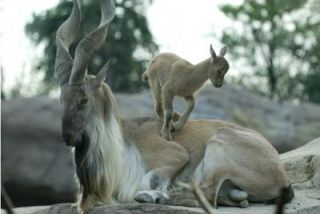 Markhor and offspring. This majestic wild goat is endangered, but populations have increased in some areas of Pakistan.
(Image: © Grahm Jones/Columbus Zoo)

The markhor, an endangered goat that's also the national mammal of Pakistan, is making a comeback in some areas of the country, according to the Wildlife Conservation Society (WCS).

Due to conservation efforts by the group, populations of the animal in northern Pakistan's Kargah region have increased from 40 to 50 individuals in 1991 to roughly 300 this year. In the larger region where the group works and conducts surveys of animal numbers, the population has increased to 1,500 from 1,000 just 13 years ago.

Still, markhor remain endangered; the International Union for the Conservation of Nature estimates there are less than 2,500 animals left and that these numbers are declining throughout their entire range, which includes Pakistan, Afghanistan, India, Tajikistan and Uzbekistan. They are threatened by illegal hunting, habitat destruction and competition from domestic goats and sheep.

Markhor are known for their spectacular, corkscrew horns that can grow to be 5 feet (1.5 meters) long. They are an important prey animal for snow leopards and other large carnivores like wolves.

"We are thrilled that markhor conservation efforts in Pakistan are paying off," said the WCS' Peter Zahler in a statement. "Markhor are part of Pakistan's natural heritage."

The group helps rangers enforce laws protecting the animal and to monitor their numbers.