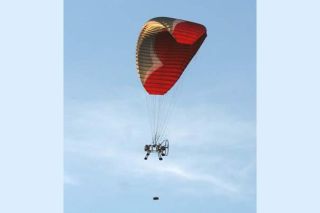 The first solution resembles a propeller-driven flying robot that uses a parafoil-style parachute for lift. That drone would act as a flying crane of sorts to carry urgent supplies from a container ship to disaster-stricken areas on shore.

A second solution is a new amphibious vehicle capable of both swimming and driving on land — so-called Captive Air Amphibious Transporters. The vehicles have air-filled pontoons to float in the water as they swim to shore, so that their tanklike treads can drive right up onto the coast.

The third solution comes in the form of motion-stabilized cranes that can sit on cargo ships and transfer the containers from ship deck onto one of the amphibious vehicles. And the fourth solution is the design for container-size support modules to provide ready-made electrical power, water and other life support for an expanded crew aboard the container ships.

DARPA's Tactically Expandable Maritime Platform program has not been alone in considering the problem of offloading ships without ports — a former U.S. Marine has been working on the idea of using large balloons to support a robotic crane system system for offloading ships.

The DARPA program has mostly wrapped up its investment, but the agency hopes its designs can prove useful for other branches of the U.S. military or government down the line.