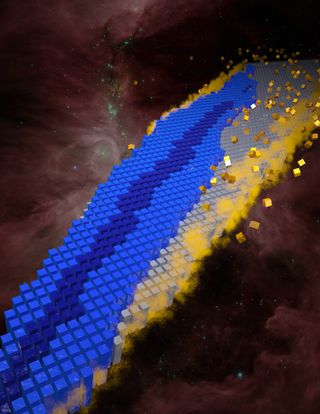 This illustration of the nuclear landscape shows atomic isotopes arranged by an increasing number of protons (up) and neutrons (right). The dark blue blocks represent stable isotopes, while the lighter blue blocks are unstable isotopes that have been observed. The gray blocks are possible isotopes that have not yet been observed. The yellow clouds represent the drip lines that bound the possible nuclides. A June 2012 study estimated total of roughly 7,000 nuclides are possible.
(Image: © Andy Sproles, Oak Ridge National Laboratory)

Scientists have long wondered whether there is a limit to the number of protons and neutrons that can be clustered together to form the nucleus of an atom. A new study comes closer than ever to finding the answer by estimating the total number of nucleus variations that can exist.

The periodic table of elements includes 118 known species of atoms, and each of these exists (either naturally or synthetically) in several versions with differing numbers of neutrons, giving rise to a total of about 3,000 different atomic nuclei. As technology has improved over the years, physicists have been building heavier and heavier atoms — element 117 was created only last year, and researchers are hot on the trail of 119. New projects are in the works to add and subtract neutrons to known elements to create ever more exotic variations, known as isotopes.

But where does it end?

In a paper published in tomorrow's (June 28) issue of the journal Nature, researchers report that roughly 6,900 nuclides (variations of atomic nuclei), plus or minus 500, should be possible. [Infographic: Nature's Tiniest Particles Dissected]

"Beyond the 7,000, we are talking about nuclides whose lifetimes can be so short that they can't form," said research team member Witold Nazarewicz of the University of Tennessee, the Oak Ridge National Laboratory in Tennessee and Warsaw University in Poland. "The system would decay instantly."

Even within those 7,000, the vast majority would be unstable, lasting only a tiny fraction of a second.  Of the 3,000 known nuclides, only 288 are stable.

Atoms are limited in the number of protons they can contain, because each proton is positively charged, and because "like repels like," they want to push each other away. Even neutrons, which have no charge, are slightly repulsive to each other. A mysterious force called the strong interaction, which is about 100 times stronger than electromagnetism, is what binds protons and neutrons together in nuclei.

"The nature or the exact form of the strong force, especially in heavier nuclei, is still a subject of very intense experimental and theoretical research," Nazarewicz told LiveScience. [Top 10 Unexplained Phenomena]

To create the new estimate, Nazarewicz and his colleagues, led by Jochen Erler of the University of Tennessee and Oak Ridge, examined what's called the drip line, a theoretical boundary on the number of neutrons that can be combined with a given number of protons to form a nucleus. (The idea is that if more neutrons are added beyond this line, they will "drip," or fall out, from the nucleus.)

To plot out the drip line, the researchers extrapolated from the best available models of nuclear interactions in heavy nuclei. By including various models, the scientists were able to estimate the first reliable error bars on their predictions, showing just how precise the estimate is.

"This is the first study which really gave an error bar and showed what is the best theoretical guess for this limit," Nazarewicz said. "It is not enough that you provide a number. You need to provide a number with [an estimate of the] uncertainty."

The new estimate isn't just a theoretical quantity — the number would represent all the possible species that might be created inside astrophysical phenomena, such as supernova explosions or neutron star mergers.

In these extreme situations, an excess of neutrons is created, and many of these neutrons can be captured by atomic nuclei, creating new nuclides. Often a process called beta decay will occur, in which a neutron turns into a proton by releasing both an electron and a minuscule particle called a neutrino. This allows the creation of not just heavier isotopes of existing elements, but new, heavier elements with more protons per atom. In fact, most of the elements heavier than iron found in the universe were created in supernovas.

The team's findings could be put to practical use when a new facility called the Facility for Rare Isotope Beams opens around 2020 at Michigan State University. The project is designed to synthesize many of the radioactive, weakly bound nuclei that have been predicted but never seen, in order to map out some of the unexplored territory in the nuclear landscape.

"Remarkably, we don't what combinations of neutrons and protons can make an atomic nucleus. We are not sure how many elements can ultimately exist, or generally for each element how many isotopes are possible," FRIB chief scientist Brad Sherrill, who was not involved in the new study, wrote in an email. "The current work is groundbreaking because it not only makes a solid prediction for how many, but also gives a good estimate of the errors in that guess. While the error band looks reasonable, we still are likely to find surprises, and it will be great to use facilities like FRIB to check these predictions. The only thing I am willing to bet is that there will be surprises along the way."

Scientists are hoping FRIB will be able to create new elements — that is, nuclei with more than 118 protons — in addition to new isotopes of the known elements.

"How many new elements can we create? We don't know," Nazarewicz said.