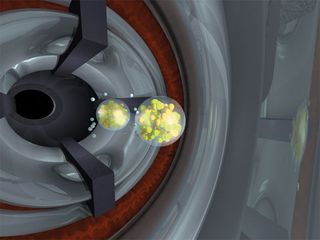 A quest is underway to create larger and larger atoms with more protons and neutrons than ever before.

By building these super-heavy elements, scientists are not just creating new kinds of matter – they are probing the subatomic world and learning about the mysterious forces that hold atoms together.

"Of course discovering something new is always very interesting, but the main motivation is, we don’t understand how nuclei work out in these extreme limits," said Dawn Shaughnessy, a chemist at Lawrence Livermore National Laboratory in Livermore, Calif.

The scientists are also working toward a tantalizing goal: They hope to discover a theoretical "island of stability" where ultra-large elements all of a sudden become easier to make. While most extremely heavy atoms disintegrate in fractions of a second, theory predicts that once elements reach a magic number of protons and neutrons, they become relatively stable again. Finding these magic numbers could also provide revealing clues about how atoms work.

So far, the heaviest element ever created has 118 protons. The number of protons in an atom – called the atomic number – determines what kind of element it is. So hydrogen is any atom with one proton, while oxygen is an atom with eight protons, or atomic number eight.

Generally, an atom has close to equal numbers of protons and neutrons, but this isn't always the case. And an oxygen atom can gain or lose neutrons but remain oxygen, as long as it has eight protons.

The heaviest element commonly found in nature – uranium – has 92 protons. Everything heavier is generally man-made.

Shaughnessy's team, in collaboration with scientists at the Joint Institute for Nuclear Research (JINR) in Dubna, Russia, discovered five of the heaviest elements known, including element 118. Their other conquests include elements 113, 114, 115, and 116.

Some of their latest work indicates they may be creeping closer to the island of stability. They can tell by measuring how long their atoms last before decaying, or breaking up into smaller atoms.

Most super-heavy elements last only microseconds or nanoseconds before decaying; it's hard for atoms with so many protons and neutrons to hold together. But some jumbo elements, with numbers of protons or neutrons that are close to the magic numbers, can last seconds or minutes. For example, early tests of the element 114 suggested it may have a half-life as long as 30 seconds. A half-life is the time it takes for half of the substance to decay.

"Even though we're not quite to the region of stability yet, we see things that can last tens of seconds, close to minutes," Shaughnessy told LiveScience. "For these kinds of things, a minute is like an eternity."

Finding elements that are relatively long-lived is exciting, not just because it hints at the island of stability, but because it provides a better chance for scientists to learn more about the element.

"Once you make a few atoms of something, and if they live in the few-seconds range, you can do chemistry on it," Shaughnessy said. "You can discover its fundamental chemical properties."

To create their monster elements, the teams use a particle accelerator called a cyclotron to speed up beams of calcium nuclei to about 10 percent of the speed of light. Then they smash these calcium ions into a target of stationary atomic nuclei.

For example, to create element 118 the researchers collided calcium, which has 20 protons, with californium, the element with 98 protons. Usually, the bombarding particles will just bounce off the target, but once in a while, two nuclei will stick together and create what's called a composite nucleus. Since 98 and 20 add up to 118, the resulting fused nucleus was the element 118.

To find just a handful of the ultra-heavy elements, the teams had to run their experiments for months.

"In a six-month experiment, we may see three to ten atoms," Shaughnessy said.

The scientists rig up special detectors primed to look for the element they're hoping to create. The detectors look for the right energy signature predicted for their goal element, while using magnets to divert any other particles.

Both the Lawrence Livermore-JINR team, and a competing German team, have been searching for element 120, but so far have struck out.

"We both ended up not finding anything, so we think we're hitting the limit of our current capability," Shaughnessy said. "As we go higher and higher, the event rate will get even smaller. You either have to run longer experiments or you have to improve technology sensitivity on how you detect these things." (The event rate refers to how often the target element will form.)

The researchers think they may be homing in on the fabled magic numbers that create stable atoms.

Element 114 lasted longer than any of the super-heavy elements just below it with fewer protons. Element 116 also had a relatively long half-life, but then element 118 turned out to be less stable, lasting less than a millisecond before decaying.

"The question is how far away are we seeing the effect?" Shaughnessy said. "We know we're not at the island of stability, but we are seeing longer half-lives."

The number of particles that can easily pack into an atom's nucleus is thought to depend on the complex arrangement of both protons and neutrons within the nucleus.

Just as electrons in an atom have energy states, protons and neutrons also have energy levels. Each energy level can hold a certain number of protons or neutrons; when a nucleus' highest energy levels are full, the particle is stable.

Scientists think the magic numbers are the numbers of protons and neutrons that completely fill a set of energy levels. An atom in this configuration would feel relatively secure, and wouldn't want to lose any protons or neutrons to decay into a smaller atom.