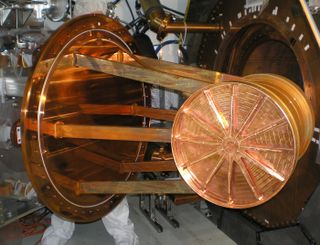 This large copper cylindrical vessel is the Enriched Xenon Observatory 200's (EXO-200) time projection chamber, the part of the detector that contains the liquid xenon, isotopically enriched in xenon-136. The photo shows the chamber being inserted into the cryostat, which keeps the experiment at extremely low temperatures.
(Image: © EXO)

Sometimes, finding nothing is just as good as finding something.

Physicists have made the most sensitive measurements yet in the hunt for a rare event that could undermine the dominant theory of particle physics, and turned up zilch.

The scientists, who are searching for a rumored particle decay process called "neutrinoless double-beta decay," ran a finely tuned detector for almost seven months, and found no significant data to suggest the process occurs. That non-detection hints that exotic particles called neutrinos may be more mundane than some have thought.

"The result could only have been more exciting if we'd been hit by a stroke of luck and detected neutrinoless double-beta decay," Stanford University physicist Giorgio Gratta, spokesperson for the experiment, called the Enriched Xenon Observatory 200 (EXO-200), said in a statement.

The scientists recorded only one signal (or event) that might have represented neutrinoless double-beta decay occuring. "That means the background activity is very low and the detector is very sensitive. It's great news to say that we see nothing!" Gratta added.

Unstable atomic nuclei (the jumble of protons and neutrons that make up the core of atoms) will often lose a neutron in a process known as beta decay. The neutron turns into a proton by releasing an electron and a tiny particle called a neutrino.

Sometimes, two neutrons are lost in a process called double-beta decay, which usually releases two electrons and two antineutrinos (the antimatter partner particles of neutrinos). But scientists have also theorized that neutrinoless double-beta decay could occur, which would produce two electrons and no antineutrinos. [Infographic: Nature's Tiniest Particles Dissected]

"People have been looking for this process for a very long time," said Petr Vogel, an emeritus physicist at Caltech and a member of the EXO-200 team. "It would be a very fundamental discovery if someone actually observes it."

If that is the case, it would contradict the predictions of the Standard Model, the reigning physics theory describing known subatomic particles. Thus, if physicists ever do see neutrinoless double-beta decay, the Standard Model will need revision.

To search for this decay, the Enriched Xenon Observatory 200 uses a copper cylinder filled with 440 pounds (200 kilograms) of liquid xenon-136 — an unstable isotope that may be able to undergo neutrinoless decay. At both ends of the cylinder, sensitive detectors are placed to catch the signals of beta decay.

The whole detector is buried 2,150 feet (655 meters) underground in the Department of Energy's Waste Isolation Pilot Plant in Carlsbad, N.M., to prevent contamination from other particles.

Still, scientists aren't giving up the hunt for neutrinoless decay. If it can be proven that the neutrino is its own antiparticle, it could help explain why our universe is made of matter and not antimatter.

If the neutrino and the antineutrino are one and the same, that may point the way toward an imbalance that could solve the antimatter riddle.