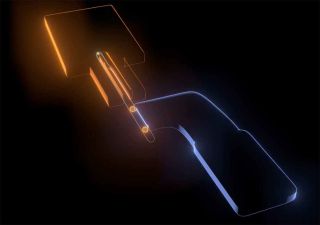 The researchers think they have created majorana fermions, which have identical antiparticles but which don't annihilate each other, at the ends of a nanowire device, shown here with orange balls.
(Image: © TU Delft)

An elusive particle that is its own antiparticle may have been found, and, if confirmed, would be the first time a phenomenon predicted decades ago has been seen in a real system.

Some researchers suggest that in the future, this mysterious particle called a Majorana fermion could be useful in carrying bits of information in quantum computers.

In a paper published in the journal Science Thursday, Vincent Mourikand Leo P. Kouwenhoven said they were able to make the Majorana fermions appear by exposing a small circuit to a magnetic field.

Until now, the only suggestion of the particle's existence was a theory posed by Italian physicist Ettore Majorana in 1937, who predicted the Majorana fermion. [Infographic: Nature's Tiniest Particles Dissected]

While the evidence is strong, there are still more experiments to do to confirm the finding. But that may be fitting: Majorana himself was, by many accounts, a brilliant physicist. (He was the first to propose a theoretical basis for the existence of neutrons.) But in 1938, he took a boat trip from Naples to Palermo and disappeared. His body was never found, and the circumstances of his disappearance have remained mysterious.

Elementary particles come in two types: fermions and bosons. Fermions are particles such as electrons, leptons and quarks (which themselves make up protons and neutrons). Fermions make up matter and obey the Pauli Exclusion Principle, which says two particles can't be in the same quatum state at the same time. (This is why two protons or neutrons, for instance, can't be in the same place at once). Bosons are things such as photons and W particles, which carry forces.

Majorana fermions are so special because they are different from other fermions, which have antiparticles — particles that have the same mass but opposite charge. An electron is negatively charged, and its antiparticle is a positron. When a particle such as an electron comes into contact with its antiparticle (in this case, a positron), the two annihilate, turning into energetic photons in this example.

Bosons, however, are particles that are their own antiparticle, and they don't annihilate when they touch each other. Majorana fermions are like photons in that respect, as they act as their own antiparticles. But unlike photons, Majoranas will still annihilate when they meet their antimatter cousins. (Neutrinos may also be like this, but it is not clear yet and is an active area of research).

In addition, unlike more conventional particles, Majoranas are "quasiparticles," which arise from the collective properties of a material. This happens in more ordinary areas as well; for example, in solid-state electronics, electrons carry negative charges, while they leave behind "holes" with a positive charge; these holes behave just like real particles, even though they appear only because of the behavior of electrons.

To try to create the mysterious particles, the team set up an experiment that involved the collective behavior of particles. For the experiment, they used nanowires, which are able to produce such quasiparticles when they are placed under the influence of a magnetic field. The results showed a tell-tale sign of the Majorana particles having been produced — a certain peak in conductivity.

While it isn't a definite find, Kouwenhoven said he thinks the evidence is pretty strong. That's partly because he gave a talk at the American Physical Society meeting in February, where he said he might have found the Majoranas. Since then, and in response to a lot of questions from others in the field, he came up with several tests to make sure he got it right.

If the finding is confirmed, Majoranas offer an easier way of storing information in quantum computers, which currently rely on atoms; these atoms become unstable with even a small disturbance, while Majoranas would be much easier to keep stable.