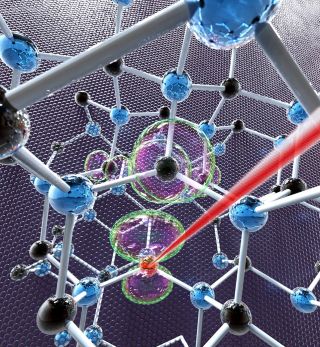 An artist's rendering of a molecular defect predicted to be a good qubit for quantum computing.
(Image: © courtesy of J. R. Weber et al., and rendered by Peter Allen)

Quantum computers may represent the next major paradigm shift in technology. In theory, such computers could perform faster and more complex computations using a fraction of the energy. However, in practice, building a quantum computer is a very tricky engineering challenge.

At the atomic level, particles do not behave in a way one would expect from the laws of classical physics. According to the Heisenberg uncertainty principle, it is impossible to precisely determine the speed and location of a particle at any given moment. Instead, particles are characterized by a wave function that represents a probability that the particle will be in a given physical state.

In quantum computing, instead of 0s and 1s, information is encoded in that wave function and the infinite variations that are possible in the spectrum of the wave.

"You have a lot more flexibility in setting the values of the things that you compute," said Chris Van de Walle, who, as a professor at the University of California, Santa Barbara, studies potential quantum systems. "You could have any continuous value that is being encoded in the wave function of some entity that you are now using as your fundamental unit of computing."

If it sounds far-out, it is. Quantum bits are a basic unit of information representing either a 1 or 0, and in quantum computing, a qubit can represent 1 and 0 at the same time. Over the last decade, researchers have investigated various ways of designing a practical implementation of a quantum bit (or, qubit). None are near completion.

"If you can come up with such qubits and incorporate them in the computing architecture, it has been shown theoretically that you can solve problems computationally that are currently not feasible," Van de Walle said. "The big challenge is to come up with specific implementations of these qubits."

One of the most promising implementations involves a defect in diamonds that leads to a missing carbon in the material's matrix, with a rogue nitrogen atom located nearby. This altered structure creates a hole, or vacancy — called an NV (nitrogen vacancy) center — with a specific wave function that many believe can be effectively manipulated for quantum computing.

In industry, defects are a negative. But when it comes to materials for quantum computing, it is the defect that makes computation possible.

"The defect is actually a good actor," Van de Walle said. "It's the qubit that you want to use as your unit of computation."

The biggest advantage of NV centers in diamonds is their ability to operate at room temperature, rather than requiring near-absolute-zero temperatures, as other quantum computing systems do. Electrons in the NV center also can remain coherent for a long time and be manipulated by outside forces.

"You can control where the vacancy is formed in the crystal and you can probe it very accurately with laser beams with a specific wave length," Van de Walle said.

Van de Walle, an expert in defects and impurities, has been working closely with David Awschalom, an experimentalist at UC Santa Barbara and a quantum computing expert, to expose the atomic-level dynamics of the diamond center. Van de Walle's computational simulations on the National Science Foundation-supported Ranger supercomputer at the Texas Advanced Computing Center matched experimental results for the NV center.

The simulations also added a few crucial pieces of information about the NV center. In particular, they found that the defect's charge state plays a crucial role in achieving a useable wavelength. This means one must control material doping in order to control the number of electrons that can enter a vacancy.

"For NV centers in diamonds, the optimal charge state is a negative one charge state," Van de Walle said. "For defects in other materials, it may be a different charge state, and just by guessing the charge state, you wouldn't be able to know if it's a good choice. But that's what we can calculate."

Simulating the quantum mechanical interactions of hundreds of atoms requires thousands of computer processors working in tandem for days. "Without the ability to run on Texas Advanced Computing Center's supercomputers, we would simply not have been able to do this project," Van de Walle said.

"The ability to take our expertise in the area of defects and to use it creatively to design defects with certain properties is really great," Van de Walle said. "It's exciting to be able to dig into what we know about defects and use all of that knowledge to construct a defect with a given property."