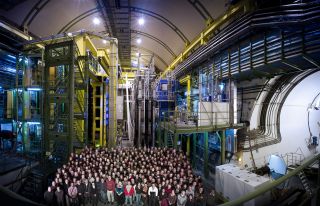 The LHCb team stands in front of their experiment, the LHCb detecor, at the Large Hadron Collider in Geneva.
(Image: © CERN/Maximilien Brice, Rachel Barbier )

Observations of extremely rare subatomic particle actions have allowed scientists to put one of the most stringent limits yet on the reigning theory of particle physics.

Physicists at the world's largest particle accelerator, the Large Hadron Collider (LHC) in Geneva, Switzerland, have watched a type of particle called B mesons decay into other particles called muons — a very unusual occurrence. By measuring just how often this happens, the scientists can test predictions made by the Standard Model, the theory that governs the realm of these tiny particles.

This theory is very successful at describing all of the known building blocks of matter, including the protons, neutrons and electrons that make up atoms, and many of their more exotic cousins. Yet physicists know the Standard Model is incomplete because it doesn't include dark matter or dark energy.

These invisible components of the universe have never been directly detected, but are thought to compose 96 percent of the cosmos. Physicists hope that by studying some of the rarest particle events, they can come closer to finding the holes in the Standard Model and discovering new physics. [Nature's Tiniest Particles Dissected (Infographic)]

The findings come from an experiment at the LHC called LHCb (for LHC Beauty), which collides protons into each other inside the accelerator's 17-mile (27-km) long underground ring.

When the protons collide, they create energetic explosions that give rise to a host of other particles — some mundane, and some exotic. Some of these include B mesons, specifically a species called the Bs (B-sub-s) meson, which is made of a strange quark and a bottom antiquark. (All particles in the Standard Model have antimatter partner particles with the same mass but opposite charge. An antiquark is the antimatter partner to the quark, which is a component of protons and neutrons.)

Bs mesons are unstable particles that usually spring into existence for less than a second before decaying into something else. It is very unusual, but not unheard of, for them to decay into two muons.

Now, LHCb scientists have measured the precise rate at which they decay into two muons: less than 4.5 decays per billion Bs decays.

"The LHCb result on Bs decaying to two muons pushes our knowledge of the Standard Model to an unprecedented level and tells us the maximum amount of new physics we can expect, if any, in this very rare decay," LHCb spokesperson Pierluigi Campana said in a statement. "We know this is an important result for the theoretical community."

The new findings could help shed light on the mystery of why the universe is made mostly of matter, and not antimatter.

When the universe was created in the Big Bang about 13.7 billion years ago, it probably contained almost equal parts matter and antimatter. When a matter particle meets its antimatter sibling, the two annihilate to become pure energy.

For some reason, most of the matter and antimatter in the early universe seems to have annihilated, leaving behind an excess of matter that created the stars and galaxies and planets we see today. But scientists don't know why there was matter left over.

"Sometimes we feel like Achilles pursuing the tortoise," Campana said. "We believe our distance from new physics is steadily halving, but we will eventually reach it!"