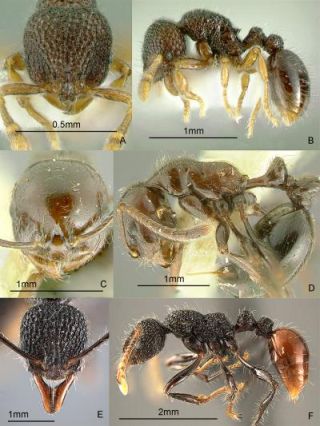 About 40 new species of ants have been discovered in the Philippines, ant researcher David General and his colleagues recently announced.

The previously unknown species belong to 11 different genera, the taxonomic classification above species. That brings the total genera (the plural of genus) found in the country to 92, which is nearly a third of the total described worldwide.

That's highly unusual for a country about the size of New Jersey, General told OurAmazingPlanet in an email. For instance, that's twice the number of genera found in Madagascar, a place renowned for its biodiversity, said General, a researcher at Palawan State University in the Philippines.

General and colleagues conducted their collections at a reforested study site in 2003 and 2004 on Luzon Island. Trees here had been cut down to grow corn 27 years before, but the area had already recovered its populations of native ants when the team visited, he said. When General returned in 2009, though, all the trees in the area had been cut down and removed again, even the stumps. "It's like I was in the wrong place," he said.

General describes the newly identified genera in a paper published in the May edition of the journal Zookeys, although individual species have yet to be named and described.

The unique features of the new genera are pretty subtle; to a nonspecialist, the animals probably look the same as other known ants. General's favorite new ant has a unique mouth, with mandibles that are extended on stems. "Because ants use their mandibles as 'hands' to manipulate their environment, this is an important adaptation," he said.

Despite the diversity of life on the islands, ant-collecting is still "in its infancy," he said, and there are many locations yet to be surveyed. That's due in part to the rugged terrain and the difficulty of traveling between the more than 7,100 different islands of the Philippines, most of which are uninhabited. The adventurous myrmecologist like General also has to contend with an active communist insurgency and malaria-carrying mosquitoes.

Rampant deforestation is also causing species to go extinct before they're discovered. That's worrying since ants are important in any ecosystem. "They are undertakers, predators, fungus gardeners, pastoralists of honeydew-producing insects, and serve as food for many birds, lizards, frogs and mammals," General said. Native ants help maintain the rainforest's web of life, and are important to preserve. "Protecting native ants will necessarily result in protecting the plants and animals that depend on them," he said.