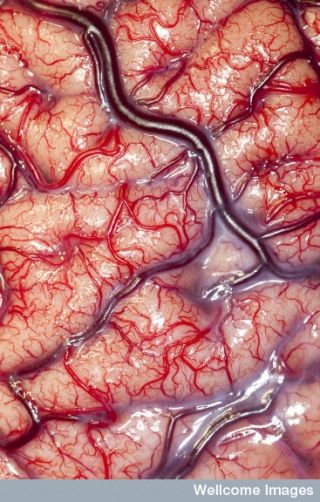 Bright-red blood vessels and thick purple veins meander across the surface of a living human brain in the winning image in this year's Wellcome Image Awards contest.

A rare peak inside the skull beat out a plethora of other gorgeous shots for first prize, including a colorful caffeine crystal and a spiny, aqua-colored moth fly that could pass as an extraterrestrial.

Cardiff University anatomist Alice Roberts, one of the judges of the annual biomedical photography contest, praised the winning image for its glimpse at the unknown. [See the Wellcome Trust Winning Photos]

"Through the skill of the photographer, we have the privilege of seeing something which is normally hidden away inside our skulls," Roberts said in a statement. "The arteries are bright scarlet with oxygenated blood, the veins deep purple, and the 'grey matter' of the brain a flushed, delicate pink. It is quite extraordinary."

Medical photographer Robert Ludlow captured the image of the living brain while observing brain surgery on a patient with epilepsy. Neurosurgeons implanted electrodes in the brain to detect areas where typical electrical communications in the brain had gone haywire, triggering seizures. In subsequent surgery, these areas were removed, and the patient made a full recovery.

"For me, the context, the composition and the clarity of this image made it a winner," Roberts said.

Stunning runners-up included a scanning electron microscope view of a moth fly (Psychodidae), whose body fuzz and segmented eyes give it the look of something out of a science-fiction or fantasy film.

Photographer Kevin Mackenzie, who manages the Microscopy and Histology Core Facility at the University of Aberdeen, found the fly hanging out on his kitchen wall. A scientist's curiosity kept him from simply swatting the insect.

"I'd seen nothing like it before, so it definitely warranted a closer look under the scanning electron microscope," Mackenzie said.

A splintered caffeine crystal was among the three images that earned University of London scientists Annie Cavanagh and David McCarthy a place among the honorees. The artistically inclined duo also got kudos for a surreal green-and-yellow close-up of a lavender leaf and for a bold starburst image of a crystal of loperamide, an anti-diarrhea drug.

Anne Weston, an honoree from Cancer Research UK, made the top 16 for her image of a brilliant pink diatom, or unicellular organism, that looks like a radiation symbol. Asked why the uncanny resemblence, Weston wrote, "In fact, the question here should be 'Why does a radiation symbol look like a diatom?' because the diatom would have existed long before the radiation symbol was designed or even thought of! There are thousands of species of diatoms, and this particular type just happens to have this unique and interesting structure."

The photography contest is sponsored by the research-funding agency the Wellcome Trust. This is the first year that the organization has offered a first prize rather than a list of honorees. Prizes were presented June 20 in London, and the winning images will be displayed at the Wellcome Collection in that city until December 2012.