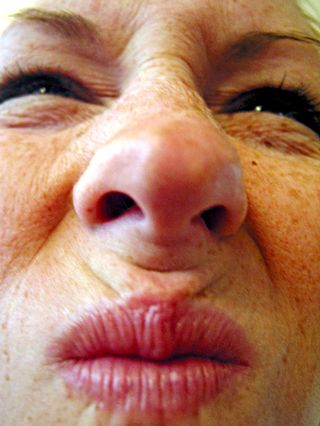 A woman sniffs with her nose.
(Image: © stock.xchng)

Odors have the power to alter moods, as I learned once sitting next to a shoeless fellow on a 22-hour delayed flight from China. But can smells heal the body, as is purported in the pseudoscience of aromatherapy?

You may think so, depending on what you've been sniffing.

But time and again, aromatherapy fails the test. Two studies published recently highlight the power of smell and the limitations of aromatherapy.

Aromatherapy is the use of plant oils to improve psychological and physical health, usually through inhalation or massage. While that sounds straightforward—after all, modern pharmacology is based on the study of healing herbs—aromatherapy, like much of the complementary medicine field, has a bizarre foundation.

Aromatherapy uses essential oils, which are highly distilled volatile organic compounds from plants. To many aromatherapists, the essential oil represents the plant's spirit. The alleged healing properties were established centuries ago, based on the ancient science of the four humors, in which disease is caused by an imbalance of one of four bodily substances: blood, phlegm, black bile or yellow bile. A plant's look, hardy or fragile, can determine its healing power.

Today, aromatherapists seem divided, with some still subscribing to the medieval notion of humorism and others creating modern-sounding theories of mind-body healing that employ quantum mechanics to explain how aromatherapy can work.

Trouble is, few studies show that it does work. Diseases are caused by parasites or genetic mutations; it is not implausible that a smell can remedy this, but the mechanism is highly uncertain.

In the Dec. 6 issue of the journal Nature, scientists from Scripps Research Institute isolated proteins in mouse urine whose odor triggers fights between male mice. It gives new meaning to the term "pissed off." The scientists say this anger pathway provides insight into unconscious human behavior.

So conversely, odors might be able to put someone at ease, which can help ease the anxiety of surgery, for example. Note, no healing is taking place.

Yet it remains uncertain which smells induce what kinds of behavior. Lavender is said to help one relax. In September, however, scientists reported in the British Journal of Health Psychology that the expectation of what lavender is "supposed" to do, and not the aroma itself, determined if the subjects felt relaxed or not.

I learned this first hand when I sniffed rosemary oil to relieve hay fever. I thought it worked, but really hay fever season was waning by the time I used it. I found out later the "real" cure was oregano oil.

Aromatherapy Web sites and books have language that's almost scientific. There is a clinical description of the plant with its Latin name, often including the percentage of esters or alcohols. Then there's the history: Oil from this plant was used in the Middle Ages to do this or that; Native Americans used it to treat x and y. The list of licked diseases ranges from arthritis to yellow fever.

You'll read about ways you can prepare it—perhaps burning it or rubbing a few drops into whatever body part ails you. And you'll read about more benefits of the oil, usually something timely like asthma, computer eyes or carpal tunnel syndrome.

Nowhere do you get any notion that this oil has been tested to be effective in treating the ailments mentioned. All you have is the testimony of superstitious medieval Europeans who thought that the Great Plague was caused by someone looking at you the wrong way. References, in fact, are not a scientific paper but usually to other books of aromatherapy recipes.

What can be expected in a field where certification can be attained online in a few weeks? Aromatherapy is dominated not by scientists but by New-Age types captivated by potpourri. And that stinks.