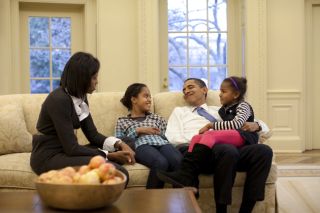 Barack Obama relaxes with his wife Michelle and daughters Malia and Sasha in the Oval Office in 2009.
(Image: © White House (Pete Souza))

History has its share of bad dads. Consider Russian czar Ivan the Terrible, who beat his pregnant daughter until she miscarried. When his son confronted him about it, Ivan struck the younger man's head with a staff, killing him.

But this Sunday is Father's Day, so we're looking on the bright side at those fathers who doted on their daughters and sons, not only keeping them out of harm's way, but also giving them space to grow their own talents.

Here's a list of historical dads who did right by their kids, though by no means a complete list. [The Animal Kingdom's Most Devoted Dads]

The first ruler of the Holy Roman Empire, Charlemagne is known as the "Father of Europe." He was also an actual father, and possibly a bit of a softie. One of his (possibly illegitimate) children was Pepin the Hunchback, so named because of a spinal deformity. Charlemagne treated his son well, favoring him over his younger brothers as was appropriate in royal lineages. But when he chose a younger (legitimate) son as his successor, Pepin the Hunchback became involved in a plot to kill Charlemagne, his wife and his legitimate children.

The plot was exposed, but even here, Charlemagne showed some fatherly mercy. Instead of executing his son along with the other conspirators, he banished Pepin to a monastery, where he lived out the rest of his days.

Charlemagne also doted on his daughters, keeping them close to the royal court and educating them. When they took up with courtiers and produced illegitimate grandbabies, he indulged those children, too. After Charlemagne's death, he bequeathed his surviving daughters convents where they could live out their days.

A counselor to Henry VIII of England, More refused to support the King's split from the Catholic Church. For his trouble, he was arrested for treason and beheaded. [10 Contested Death Penalty Cases]

But before all that, More was a good dad. He provided his three daughters the same classical education as his son, which was very unusual for 16th-century England. During More's imprisonment for treason in the Tower of London, his oldest daughter Margaret Roper visited him frequently. After his death, Roper bribed the man who was supposed to throw her father's head into the Thames River, saving it for a decent burial instead.

U.S. president Roosevelt Jr. called his father "the best man I ever knew." In fact, Teddy's tribute to his father in his autobiography is so moving that we'll let him explain what made his old man great:

"He combined strength and courage with gentleness, tenderness and great unselfishness. He would not tolerate in us children selfishness or cruelty, idleness, cowardic, or untruthfulness. As we grew older he made us understand that the same standard of clean living was demanded for the boys as for the girls; that what was wrong in a woman could not be right in a man. With great love and patience, and the most understanding sympathy and consideration, he combined insistence on discipline

"My father worked hard at his business, for he died when he was forty-six, too early to have retired. He was interested in every social reform movement, and he did an immense amount of practical charitable work himself. He was a big, powerful man, with a leonine face, and his heart filled with gentleness for those who needed help or protection, and with the possibility of much wrath against a bully or an oppressor."

The naturalist and father of evolutionary theory had 10 children with his wife, Emma Wedgwood. He doted on his children, and was devastated by the death of 10-year-old daughter Annie in 1851. His other children remembered him as a loving storyteller who took interest in their lives and encouraged their freedom.

"Indeed, it is impossible adequately to describe how delightful a relation his was to his family, whether as children or in their later life," Darwin's daughter Francis wrote in "Autobiography of Charles Darwin and Selected Letters" (Dover Publications, 1992).

Speaking of family tragedies, Nicholas II of Russia would eventually be murdered along with his wife and children by Bolsheviks. But during his life, Nicholas II seems to have been a concerned father, albeit a poor ruler.

Nicholas and his wife Alexandra had four daughters and a son, Alexei. Unfortunately, Alexei had hemophilia, a blood disorder that left him susceptible to uncontrolled bleeding. Nicholas worried about his heir, said Brian Pavlac, a professor of history at King's College in Pennsylvania. But he let his wife call in the infamous faith healer Grigori Rasputin, which his political enemies later used against him as the healer gained influence in the court.

By the way, Rasputin himself had a daughter, who wrote several memoirs defending her father's honor. Maria Rasputin escaped Russia a few years after her father's death and became a cabaret dancer, a governess, a cookbook author and a lion tamer. (Really.)

The 44th president has two daughters, whose prize when their father came to office was a Portuguese water dog named Bo.

Obama also wrote a book addressed to his daughters, "Of Thee I Sing," (Knopf Books, 2010), which mixes praise and encouragement for the girls with mini-biographies of American role models such as Helen Keller and Georgia O'Keeffe.

But perhaps the sweetest public declaration of love Obama has made for his daughters was an open letter in Parade magazine shortly after his inauguration.

"When I was a young man, I thought life was all about me," Obama wrote. "But then the two of you came into my world with all your curiosity and mischief and those smiles that never fail to fill my heart and light up my day. And suddenly, all my big plans for myself didn't seem so important anymore. I soon found that the greatest joy in my life was the joy I saw in yours."

Sounds like a good Father's Day sentiment to us.