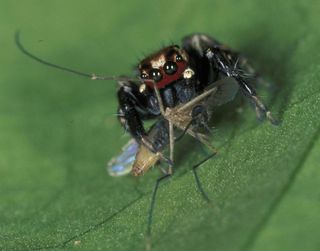 Jumping spiders, also known as vampire spiders, have a very specific diet: female mosquitoes that have just fed on blood. A new study using "Franken-mosquitoes"— glued-together parts of different mosquitoes — finds that the spiders check for not only a blood-red belly but also for girly antennae while choosing where to pounce.

"In the past it was thought that jumping spiders responded to very basic stimuli that triggered predatory behavior. Something along the lines of, 'It is small and it moves, therefore it is prey,'" study researcher Ximena Nelson, of the University of Canterbury, in New Zealand, told LiveScience.

The new study indicates they are much pickier eaters than that, Nelson said: "It is clear from these results that this type of 'algorithm' is not used by E. culicivora [the jumping spider]. At the very least, it is much more sophisticated."

The spider's favorite food by far is freshly blood-filled mosquitoes, and this arachnid species seems to need the blood to survive, the researchers said, hence the "vampire" moniker.

"Other 'bugs' in general are not as tempting, possibly because of the absence of vertebrate blood," Nelson said. This blood "does seem to be integral to the diet of this spider, although we are not entirely sure why this is."

On the shores of Lake Victoria in Sub-Saharan Africa, the spiders stalk sitting mosquitoes until they are about an inch (2 to 3 centimeters) away, then jump on them. The youngest of the spiders actually jump onto the stomachs of mosquitoes and bite them in midflight. They hold on as the insects drop to the ground, then devour them.

Since the spiders need the blood the female mosquitoes have ingested, it's important for them to choose the right prey. Female mosquitoes look slightly different from the males.

"A trained human with decent eyesight can detect the difference without much difficulty, but it is solely on the basis of how 'fluffy' the antennae look," Nelson said. "Males have more 'setae' on their antennae," which make their headgear fuzzier than the females'. [Dazzling Photos of Dew-Covered Insects]

The spiders are also on the lookout for the swollen red belly of a recently blood-fed female.

To find out what features the spiders use to choose their target, the researchers created "Franken-mosquitoes" by gluing together body parts of starved and blood-fed male and female mosquitoes (the head and thorax of one, the abdomen of another).

They dangled these mix-and-match mosquitoes in front of the spider to see what it would go for. The researchers found that two body parts played an important role in the spider's food choice: the big red belly and the antennae. The spiders were less likely to attack mosquitoes with fuzzy antennae than those with bare headgear, even if both had a full red belly, the researchers found.

"Any 'Franken-mosquito' that had blood and had female antennae was evidently considered 'good food,'" Nelson told LiveScience in an email.

The study is detailed today (June 7) in the Journal of Experimental Biology.